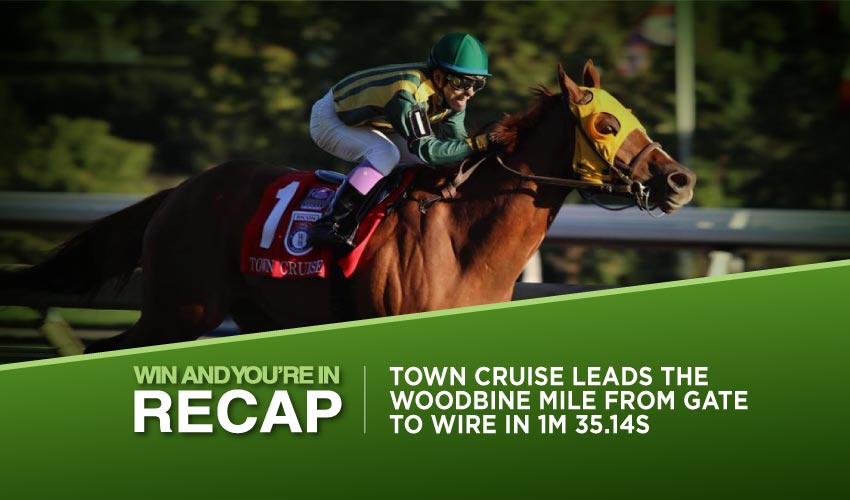 A spectacular meeting at the track located in Toronto, Canada, provided some eye-catching performances. The pinnacle of Saturday, the Woodbine Mile, resulted in a gate-to-wire victory by underestimated Town Cruise, who had no problems leaving preferred duo Raging Bull – Set Piece behind.

La Dragontea managed to score among fillies and mares in the G1 Canadian Stakes, while a European team landed a trio of G1 races spanning from Saturday to Sunday. Frankie Dettori and Charlie Appleby delivered victories among youngsters with Wild Beauty and Albahr; moreover, Godolphin’s blue colors shined bright also among stayers thanks to impressive Walton Street.

The G2 turf race over a mile and a furlong are the first to mention from Saturday’s card at Woodbine as five three-year-old and older fillies and mares clashed in here, with La Dragontea (6-5) taking the victory. After Christophe Clement bay finished fourth in her first Grade attempt, she went to win an Allowance race easily, and this time, La Dragontea performed well, too.

In this race with the purse of $250,000, the four-year-old filly ridden by Joel Rosario was quick on her feet and sat behind leading Our Secret Agent (57-20). Once the small field turned for home, all jockeys started asking their rides for more, while Rosario was still waiting patiently, and when he urged La Dragontea forward, she quickly left her rivals behind in 1m 50.33s. Court Return (36-5) came second by a length, with Barkin (76-10) finishing third. Our Secret Agent got tired in the end and was fifth, beaten even by fourth Merveilleux (67-20).

This mile and a half-long turf race ended similarly to the Canadian Stakes, for Walton Street (17-20) also settled behind the leader, smoothly romped to the top in the final stretch, and won easily in 2m 29.07s. Among the company of three-year-old and older horses, the seven-year-old gelding trained by Charlie Appleby was the preferred victory candidate as he had some excellent results from Dubai under his belts.

After winning a couple of G2 races, Walton Street looks like a G1 winner in the making. Because Godolphin joined forces with Frankie Dettori for the occasion, it was the famous Italian aboard Walton Street when he settled behind Primo Touch (41-1) and galloping for the purse of $600,000; the bay seemed relaxed and ready to fire, which he did impressively when the field ran into the final stretch. Walton Street bolted forward and unchallenged; he struck the gold by 5 and ¾ of a length.

Just, at first sight, the Canadian International should’ve been a European matter as it was in the past years, but this time Desert Encounter (74-10) had to be satisfied with second place. After winning this race twice, the nine-year-old warrior again displayed a stunning turn of the foot; however, Walton Street was already far from him. Still, the brave David Simcock bay showed a brilliant effort, leaving mentioned Primo Touch behind in third. Nobody else could outrun even the leader as English Conqueror (233-10) was fourth, Belichick (10-1) fifth, and last time out G3 winning Corelli (103-20) was disappointing when managing the only sixth place.

While both Walton Street and La Dragontea went to the respective races as a favorite, six-year-old Town Cruise (87-10) was quite underestimated contestant of this G1 turf race over a mile. It’s no wonder, though, as the Brandon E. Greer trained gelding finished second in a G2 race last time out, in the company the purse of $1,000,000 attracted, Town Cruise wasn’t just expected to be better than Raging Bull (19-5) and Set Piece (33-20). The former has already become a G1 star, while the latter is a great horse in the making; still, neither of them made an impact on the race as Town Cruise achieved the victory from gate to wire in 1m 35.14s. By his easy success by 2 and ¼ length, the chestnut helped not only his trainer Greer but also his jockey Daisuke Fukumoto reach their first G1 win.

Space Traveller (133-10) finished second, and his effort was also surprising, yet both he and the winner carried less weight than Raging Bull, who tried hard in the final stretch, though, he just couldn’t challenge Town Cruise and took third place. March To The Arch (9-1) and Ride A Comet (29-4) were close in fourth and fifth, respectively, however, the anticipated run by talented Set Piece resulted only in the seventh spot. His time may eventually come, but he left the rear of the field too late to get properly into Saturday’s race.

After Walton Street’s victory, Charlie Appleby and Frankie Dettori definitely weren’t overachieving great things at Woodbine. On Sunday, the blue colors saw two two-year-old G1 winners, with Wild Beauty (29-20) outclassing her rivals in the Natalma Stakes for junior fillies. The turf race over a mile with the purse of $400,000 attracted a field of 10 participants, while the G3 placed and already quite experienced bay, Wild Beauty, was the favorite. She started the race at the rear of the field; soon enough, she improved her position, so the daughter of Frankel didn’t turn for home far from the front. Frankie Dettori urged the filly forward at the outside of the stretch, and while Pizza Bianca (69-20) was trying on the inside, Wild Beauty quickly went past her. Thanks to her long, consistent finish, the favorite romped to first place and succeeded in her first G1 in 1m 35.08s. Pizza Bianca, trained by Christophe Clement, took second place, 2 and ¼ length behind the winner, while Eminent Victor (109-20) grabbed the third.

Also, the third G1 victory for Frankie Dettori, Charlie Appleby, and Godolphin happened in a G1 turf race meant for two-year-olds as Albahr (13-20) was a class apart in the Summer Stakes. With the purse of $400,000 up for grabs, nine youngsters clashed on the mile-long distance, and the favorite, once again, strikes gold easily. Already gelded Listed winner at Salisbury, Albahr similarly commenced the race as his stablemate, so sitting at the rear of the field, he swiftly improved once asked, and as the front hit the final stretch, the chestnut was already fourth. Pointed outside, Albahr then kicked off and showed an eye-catching turn of the foot when drawing clear from his rivals. Winning in 1m 35.77s, the son of Dubawi and a half-brother to Australian G1 scorer Cascadian crossed the wire with a 2 and ¼ length advantage over Grafton Street (37-4), who had to fight for some space even to unfold his finish. Degree of Risk (142-10) was another Godolphin bound horse, carrying the blue colors to third place here.

Follow us on Social Media for instant horse racing news!