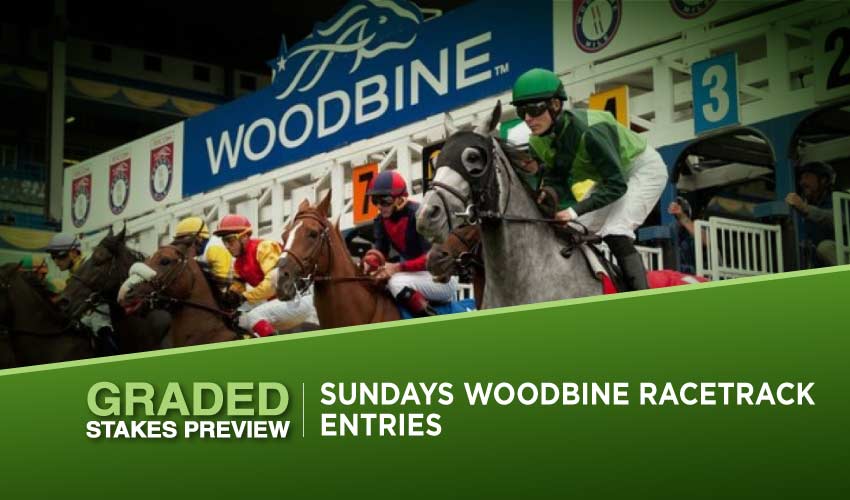 Woodbine Racetrack entries for this Sunday: The Grade 1 EP Taylor taking center stage, in which last year’s winner Etoile returns to defend her crown against strong opposition. The highlight of the undercard is the Grade 2 Nearctic, a tightly contested sprint headed by last-time-out Grade 1 winner Town Cruise.

The last three trainers to win the EP Taylor, one of the great races of Canada, are all involved in a bid to embellish their record in Sunday’s feature, and unavoidably all eyes will be drawn to the three-ply entry of Chad Brown, who is in hot form at present.

His hopes are led by last year’s EP Taylor winner Etoile (5-2), who held on gamely by a neck to thwart Court Return (15-1) 12 months ago. The five-year-old has run only twice since but has held her form well, with the outcome of the Grade 2 Dance Smartly over course and distance last time particularly pertinent to today’s contest.

Etoile closed from rear in the Dance Smartly and didn’t get there in time, going under by half a length to Mutamakina (5-1), with Merveilleux (15-1) a neck away third and Court Return half a length back in fourth in a blanket finish. Now she is 3lb better with the winner and 4lb better with those behind her, and on a strict reading of form should come out on top. She has never missed the board in three starts here and used the Dance Smartly as a springboard to win the EP Taylor last year.

That victory marked a return to her best for Mutamakina, who stays further than this distance and figures to stay near the pace and keep running when others begin to weaken.

Kevin Attard, who won this in 2019, sends Merveilleux, who is winless in 2021 and has yet to land a Graded stakes. Attard’s chances of a repeat win are not as strong as those of British trainer Roger Varian, who collected here in 2018 and ships in Waliyak (8-1), who arrives in peak form.

A month ago she stayed on strongly to win a Group 3 in the mud at Chantilly over nine furlongs, and before that was runner-up to subsequent Group 1 winner Saffron Beach in a Group 3 at Sandown Park over a mile. The return to today’s distance will suit her and she hasn’t been off the board all year. A Brit jockey could be seen as a disadvantage, but possibly less so on turf. Refreshingly, she doesn’t take Lasix.

Brown’s second-string is Great Island (3-1), who has hit the board in all her eight starts and comes here fresh from second place behind War Like Goddess in the Grade 1 Flower Bowl at Saratoga. The third horse there, My Sister Nat, won a Grade 3 next time out, and there are grounds for believing that Great Island is Brown’s better chance with first-time Lasix. His third choice Kalifornia Queen (6-1) was a half-length behind Great Island in a Grade 3 at Monmouth Park two starts ago, also gets first-time Lasix, and her German pedigree will help her if it comes up muddy today.

The narrow victory of Family Way (15-1) in a Grade 3 at Kentucky Downs latest doesn’t read well among this company, and neither does the French provincial form of shipper Keyflower (20-1), but the in-form La Dragontea (8-1) is worth a second look after her victory in a Grade 2 over a mile-eighth here last time out, in which she beat Court Return by a length, with Merveilleux a length and a quarter further back in fourth.

The Nearctic, named after the daddy of the daddy of them all Northern Dancer, has drawn a deep field of sprinters headed by a horse who has been excelling at a mile this year.

It’s a drop down in distance and grade for Town Cruise (2-1), whose last two starts have been the best of his career. In August he tried to wire the field in the Grade 2 King Edward here at a mile, but was collared in deep stretch and beaten a length and a quarter by Olympic Runner (6-1), with Avie’s Flatter (8-1) a close fourth and Jolie Olimpica (12-1) – who won the Grade 2 Nassau here over a mile in July, but hasn’t yet rediscovered her sparkling form of 2020 – a well-beaten sixth.

Town Cruise improved on that last time out when going gate to wire in the Grade 1 Woodbine Mile for a comfortable score, turning the tables in fine style on eighth-placed Olympic Runner, and could be hard to pass given the likelihood that he will get his own way on the speed again. He couldn’t be in better shape.

Avie’s Flatter has seen the back end of Town Cruise the last twice, but before that just held on to beat Olympic Runner by a neck in the Grade 2 Connaught Cup over seven furlongs here in July, and may be suited by dropping further back in distance.

Inconsistency is an issue with Admiralty Pier (7-2), but the form of his narrow defeat in the Grade 1 Highlander over course and distance last time, when he was charging hard late but just came up a half-length short, would give him a huge chance if he can replicate it.

White Flag (5-1) will have been tuned up nicely by his game victory in an allowance optional claimer here last month, his first start of 2021. He was third in the Nearctic in 2018, but has never won at Graded level and his best days may be behind him.

Local ace Mark Casse’s three-strong entry is led by Olympic Runner, although his Lucky Curlin (10-1) put on a good show when runner-up to Pink Lloyd in the Grade 3 Bold Venture over six and a half furlongs here last month.