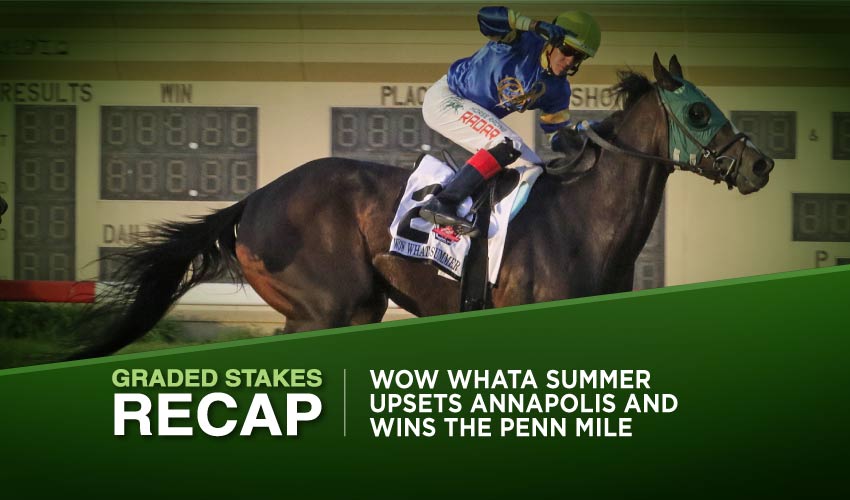 On Friday, the Penn National Race Course opened its gates to host the G2 Penn Mile for three-year-olds, where Wow Whata Summer caught off guard all of his rivals and delivered a huge upset. His odds were usually around 83-1. Among three-year-old fillies in the Penn Oaks, Haughty didn’t allow any doubts and secured an impressive victory in her seasonal debut.

The purse of $150,000 lured in a field of five three-year-old fillies who clashed at the distance of a mile. On the turf surface, Haughty (2-5) was the hot favorite of this Listed race that gradually evolved into a one-filly-show.

Trained by Chad Brown, the bay travelled in fourth, and as soon as she got the cue from Flavien Prat aboard, she accelerated beautifully. She, indeed, was quite hectic in the final stretch; still, she was gaining the advantage over her rivals with each stride to cross the wire in 1:44.43. Outsider Irie Empress (64-1) took second place four and ¾ lengths behind the victress, while Belacqua (39-5) ran in third.

The victorious filly was expected to strike gold here after finishing third among the G1 company in 2021; however, she only entered the season on Friday. Still, she didn’t allow any speculation about who is the best filly in the field when destroying her rivals in the final stretch and suggesting she definitely has the potential of returning into the elite of three-year-olds on the turf surface.

Irie Empress ran a great race from the front as she held onto second place in the closing stages, while the rest of the participants didn’t really impact the race at all.

The G2 turf event was held at the distance of a mile and open to three-year-olds vying for the purse of $400,000. Like in the Penn Oaks, the race attracted a big favorite in Annapolis (1-2); however, he didn’t manage to record another G2 success in his seasonal reappearance as outsider Wow Whata Summer (833-10) was just uncatchable on Friday.

The Tyler Conner piloted bay was restless throughout the race and only calmed down when sent to the front in the final turn. After that, he didn’t let anybody better him and cruised home in 1:42.39, keeping the advantage of one and ¼ of a length over second Annapolis. Uncaptured Spirit (84-5) seized the third spot.

The James L. Lawrence II bound gelding was a rightful outsider in the field because he scored a victory only in his debut in 2021, upon which he couldn’t get past fourth place in black-type races. Last time out, he ran in third in an Allowance race behind mentioned Uncaptured Spirit, but on Friday, everything just went into his stride, and Wow Whata Summer recorded his career-best performance.

Annapolis was a bit stiff in the final stretch and might’ve needed the outing to stretch his legs properly, and in his next start, he needs to be considered again.

Follow us on Social Media for instant Penn Mile updates!