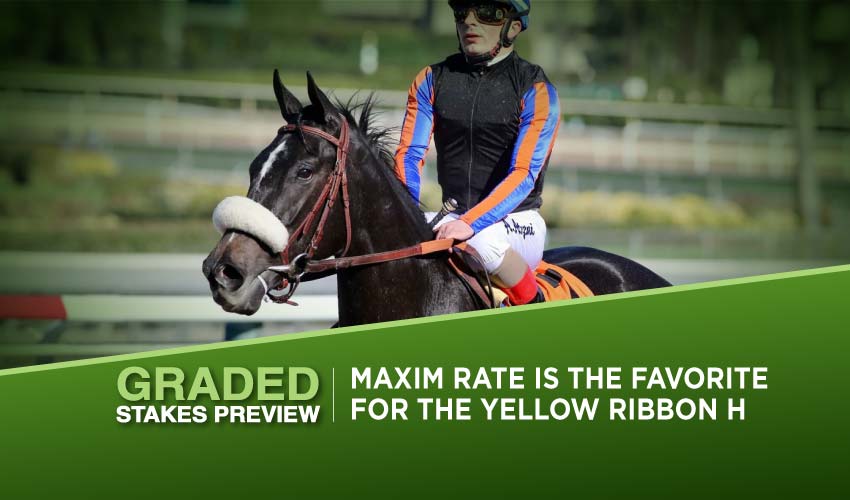 Del Mar Racetrack will host some graded races and we will cover those previews; starting with the G2 Yellow Ribbon H, Best Pal and the G3 La Jolla Handicap, stay tuned for the Horse Racing results!

Best Pal was a great friend to Del Mar, and the race in his memory – a $200,000 Grade 2 over six furlongs on the main track, for juveniles – is the highlight of Saturday’s card at the seaside venue.

It’s a race that’s all about potential, and morning-line favorite Pappacap (8-5) has bucketloads of that. The son of champion Gun Runner was made a favorite for his debut at Gulfstream Park in May and justified that confidence, breaking fast and staying on the lead throughout for a two-and-three-quarter-length win.

He may face his stiffest examination from Finneus (3-1), who broke his maiden on his second start when finishing fast and late to steal it close home at Santa Anita. That experience will be in his favor here because Pappacap has never had to roll up his sleeves and fight, but there’s always the chance with a horse like that that he won’t need to, at least yet.

Pappacap is the choice, with others of interest being Santa Anita winner Bet On Mookie (5-2) – Dodgers fans will be all over this colt – and Churchill Downs debutant scorer Aquitania Arrival (4-1), stablemates at leading Del Mar trainer Peter Miller’s barn.

The supporting feature, the $200,000 Grade 2 Yellow Ribbon Handicap, a turf race at a mile-sixteenth for fillies and mares three-year-olds and up, has drawn a tight field in which it’s hard to see a standout.

A good place to start is reigning champ Bodhicitta (6-1), who got up in the last stride to win by a nose 12 months ago and gave notice that she is still a potent force when third in the Grade 1 Gamely at Santa Anita on her seasonal reappearance (Keeper Ofthe Stars (12-1) fourth, Charmaine’s Mia (4-1) sixth). Gamely winner Maxim Rate (7-2) is in opposition again and had a length to spare over Bodhicitta that day, and now spots her an extra pound to even things up.

There will be little between the two, with Maxim Rate a slight preference. Track specialist Raymundos Secret (6-1) – three from four, including the Grade 2 John C Mabee – has to be on any short-list, as does last-time-out course winner Ippodamia’s Girl (12-1), who beat Brooke (12-1) a half-length in that tune-up. Toss Grade 2 winner Princess Grace (8-1) into the mix, and it’s a proper puzzle.

The $150,000 Grade 3 La Jolla Handicap, the centrepiece of Sunday’s card, for three-year-olds at a mile-sixteenth on turf, is a little simpler to parse if European form is taken into account.

Zoffarelli, making his first start in the US, was nowhere near Graded class in Britain, whereas Sword Zorro showed reasonable form in Ireland and has adapted well to life Stateside, chasing home Hudson Ridge in a black-type affair at Santa Anita in May. The margin of defeat was a length and a quarter, but Sword Zorro has a 5lb pull today and can turn the tables on Hudson Ridge.

Easy Iowa Derby winner Stilleto Boy will be a threat, but this can go to Cathkin Peak, who was second best to subsequent Santa Anita Derby winner Rock Your World on his most recent start and has winning form at Del Mar.