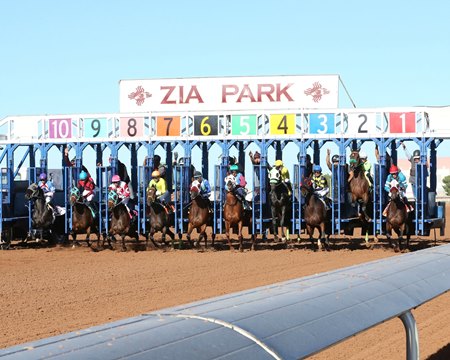 Before the start of racing at Zia Park on Tuesday, Dec. 22, an assistant starter was found in possession of an electrical device. The starter has since been suspended by the New Mexico Racing Commission (NMRC); and has also been excluded from the grounds.

The Association of Racing Commissioners International posted their decision online; citing Jaime Aldavaz Jr. with disruptive behavior and saying that he was “interfering with the orderly conduct of the race meet.”

It was the Lea County Drug Enforcement Agency who discovered the electrical device while performing a search.

The nature of the device has, to this point, not been revealed.

In most cases; it is a buzzer that is used by jockeys to prompt their mount to run faster during the course of a race. Goes without saying that the use of such devices is prohibited.

It’s somewhat surprising to see a starter caught with an electrical device, as most previous cases have involved jockeys. One of the most recent cases came at Canterbury Park; where jockey Danny Velazquez made horse racing news when he was found to have a buzzer and a loaded firearm in his vehicle earlier this year. Velazquez was ultimately suspended for a year by Canterbury Park stewards.

Given that assistant starters are in close contact when leading horses into the starting gate; there does exist an opportunity to pass on an electrical device. No other party was named in the ruling, but a schedule with the stewards will be conducted on Dec. 30 via teleconference, which could result in further horse racing news regarding this incident.

This is not the first time that there has been an issue with an assistant starter at Zia Park this year. Just last month, Ramon Alvarez Jr. received a 6-month suspension related to starting gate misconduct. According to an NMRC executive; Alvarez was seen slapping a horse numerous times while it was in the starting gate during one of the races at Zia Park on Oct. 20.

The latest incident is another black eye for the racetrack; so it will be interesting to see what steps they take in an effort to crack down on these issues.

Check Horse Racing Tote for more Road to the Kentucky Derby updates; as well as other news, tips, and results from the sport of kings.