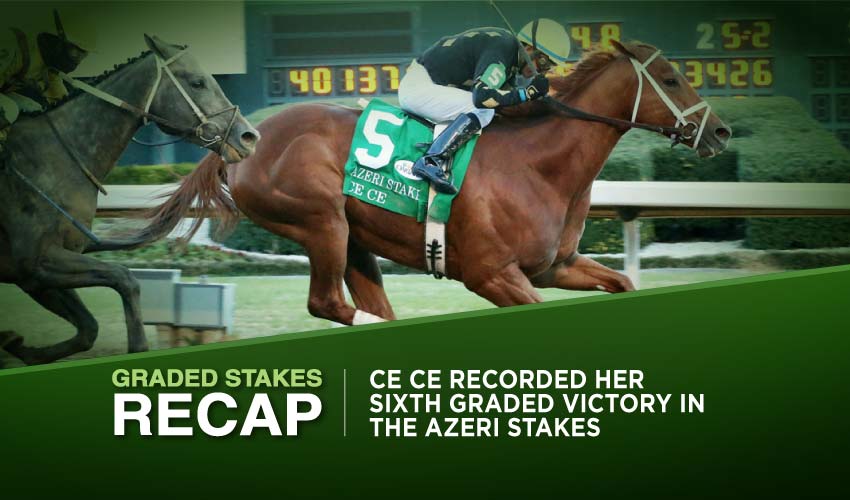 Saturday’s card at the Oaklawn Park featured mainly the G2 Azeri Stakes Recap for four-year-old fillies and older mares where the Champion Female Sprint Horse 2021, Ce Ce, showed up for the second 2022 outing. Like a true champ, she scored the race after delivering a gutsy performance.

Although she has taken on last year’s winner Shedaresthedevil and had to maintain her position in front of strongly finishing Pauline’s Pearl, the six-year-old chestnut prevailed this time and looked ready for every single challenge she’s faced with.

The prestigious G2 race for four-year-old fillies and older mares offered a purse of $350,000 to seven participants who clashed at the distance of a mile and a half of a furlong.

On the dirt surface, six-year-old Ce Ce (17-10) once again showed she had a heart of a fighter when she recorded her sixth Graded victory by ¾ of a length. After finishing second in her seasonal debut, trainer Michael McCarthy pointed his stable star towards a longer trip than Ce Ce’s been seen most recently. Still, the daughter of Elusive Quality was just adamant about going for the win this time.

Under Victor Espinoza, Ce Ce galloped in fourth place on the outside of the field, pressed forward in the final turn, and once she reached the final stretch, the chestnut took command and seemed primed to score the race easily. Still, she had to put up a fight as Shedaresthedevil (2-1) was, indeed, beaten when turning for home, but Florent Geroux shook her up for a short attempt to fight back, while Pauline’s Pearl (29-10) looked a threat on the outside.

Despite these efforts, Ce Ce used the fact she carried the smallest weight on her back to snatch the win in 1:43.55 while giving the vibes she’s ready to achieve other grand victories throughout the 2022 season.

Mentioned Shedaresthedevil posed as a favorite here, given she scored the race in last year, but after setting the pace, she couldn’t keep up with Ce Ce in the closing stages, while she had nothing left in her tank even to deny flying Pauline’s Pearl second place. This grey four-year-old ran especially a great race, considering she carried the biggest weight around and also stumbled at the start. Judging from this performance, she could quickly join the elite of older mares.