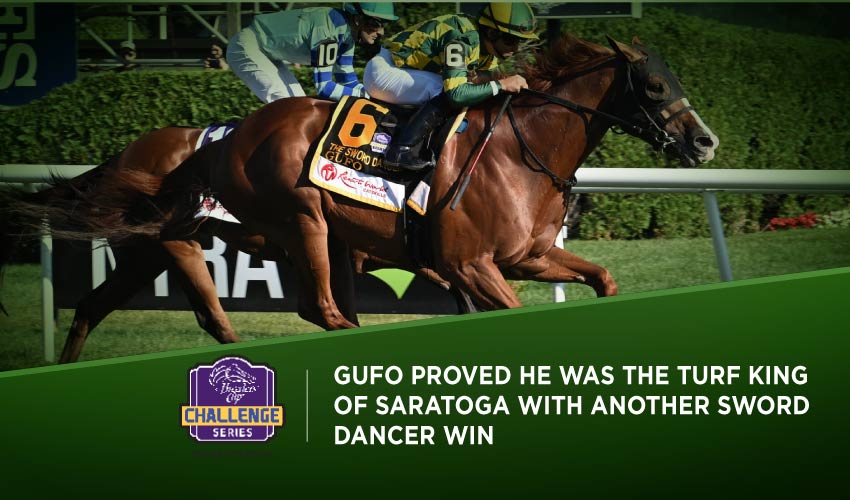 There were three familiar faces in the winner’s circle after the 2022 Sword Dancer Stakes (G1) at Saratoga on Saturday, as Gufo took the turf prize for the second year running, providing trainer Christophe Clement with his fourth victory in the race and jockey Joel Rosario with his third of four winners over the course of the day.

Same race, same result. Gufo proved he was the turf king of Saratoga when running a photocopy of a race to record back-to-back wins in the Sword Dancer, earning himself a free pass to the Breeders’ Cup Turf in the process.

Last year the strapping son of Declaration Of War came from last to first to win the Sword Dancer by a neck. This time around he wasn’t last but still came from a long way back under Joel Rosario to win by a half-length, the 4-1 third-choice grinding away at the advantage held by longshot Mira Mission – who had taken over from long-time leader Tribhuvan at the top of the lane – until running that rival down in the last few jumps, stopping the clock in a tick under 2:29.

“We got a good trip,” said Rosario, who signed for four wins during the afternoon, including the Travers aboard Epicenter. “He really came with a run, he really responded well to everything I asked him to do. He loves it here.”

The winner’s barn mate Soldier Rising, who was last through the early going, came from even further back to claim third, beaten another half-length, with the surprisingly favored Irish raider Broome fourth after blowing the break and being unable to adopt his favored front-running tactics. The much-loved veteran Channel Maker, winner of the race in 2020, dropped away from the turn to finish last of ten, and at the age of eight may be coming towards the end of a glorious career.

“Gufo has been a very good horse these past three years. Unfortunately, sometimes he has a tendency to drop too far off the pace,” said trainer Christophe Clement, who was winning the Sword Dancer for a record fourth time.

“Today, he had a great trip. He was never that far back, and he was traveling well. When Joel asked him, he exploded in the stretch. He deserved to win again and I’m delighted.”

Gufo certainly has been a stable star in recent times, posting a G1 score in each of the last three years, landing the Belmont Derby in 2020 before his Sword Dancer double as well as hitting the board in six other top-level contests. With very nearly $2m in his bankroll and a very solid nine-for-19 record, Gufo has few peers in route races on the lawn.

If last year’s pattern is to continue, Gufo is likely to take in the G1 Joe Hirsch Turf Classic at Aqueduct on October 8 before heading to Keeneland for the $4m BC Turf, in which he ran the worst race of his career when finishing tenth at Del Mar last year.