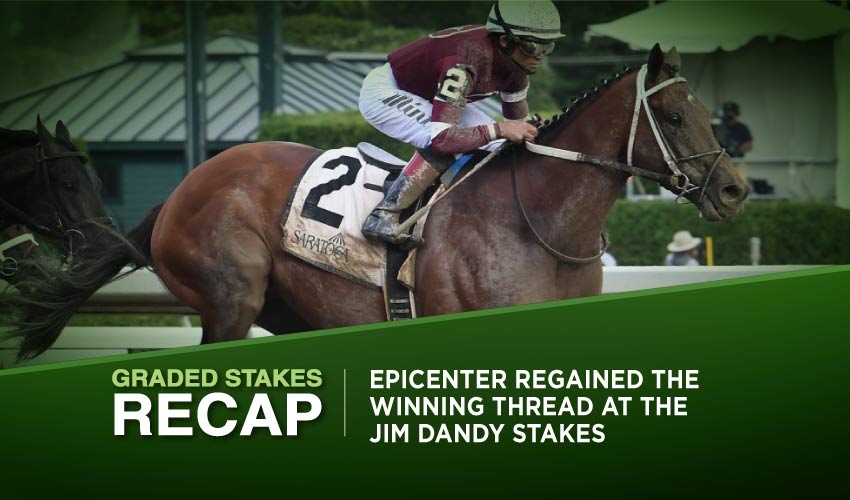 It was the Steve Asmussen and Joel Rosario show at Saratoga on Saturday, with the pair teaming up to win the G2 Jim Dandy Stakes with the rebounding Kentucky Derby and Preakness runner-up Epicenter, and the G1 Alfred G Vanderbilt Handicap with the history-making champion sprinter Jackie’s Warrior.

Redemption was the theme in the Jim Dandy at Saratoga on Saturday, as Kentucky Derby and Preakness runner-up Epicenter regained the winning thread on a stellar afternoon for trainer Steve Asmussen and jockey Joel Rosario.

The Gun Runner colt had been favorite at Churchill Downs and at Pimlico and was top of the tote board again at even-money, but this time made no mistake.

He sat off the steady fractions set by second-choice Early Voting and made a smooth run down the center of the track in the stretch, leading at the eighth pole and quickening clear to beat Zandon by a length and a half, stopping the clock in 1:49. Tawny Port was a half-length back in third, with Early Voting fading to finish last of the four runners.

“It’s extremely rewarding, after two tough races, to bring him back to the winner’s circle where he belongs,” said Asmussen. “It’s a great relief that he ran his race. This is fabulous.”

Epicenter – now five-for-nine, and only out of the first two on his debut – was adding to his earlier triumphs in the G2 Risen Star and the G2 Louisiana Derby, but he still lacks a G1 win.

He will get the opportunity to fix that on his next start in the $1.25m ten-furlong G1 Travers, back here on August 27, when his rivals are likely to include Kentucky Derby winner Rich Strike and old rival Zandon in a race that may go a long way towards determining end-of-year honors.

Three-quarters of an hour earlier, Asmussen was part of Saratoga history when his magnificent champion sprinter Jackie’s Warrior coasted home in the Alfred G Vanderbilt, becoming the first horse to win a G1 at the Spa in three consecutive years.

It was as easy as his 1-5 odds suggested it would be, Jackie’s Warrior cruising down the lane under a motionless Joel Rosario to win by a two-length margin that offered no sense at all of his absolute superiority. The longshot Kneedeepinsnow was runner-up, Willy Boi was three lengths back in third, and the clock showed 1:09 and four-fifths.

“Of all the great racehorses to have run here, he’s the only one to do that [win G1s three years running],” said Asmussen.

“It’s racing immortality. You can’t imagine how much this horse means to the whole barn.”

The four-year-old’s previous G1 wins at the Spa were the 2020 Hopeful and last year’s H Allen Jerkens Memorial. He will bid to extend his five-for-five record at Saratoga in the seven-furlong G1 Forego on August 27, and will then head to the Breeders’ Cup Sprint at Keeneland Race Course for his last start before being retired to stud.