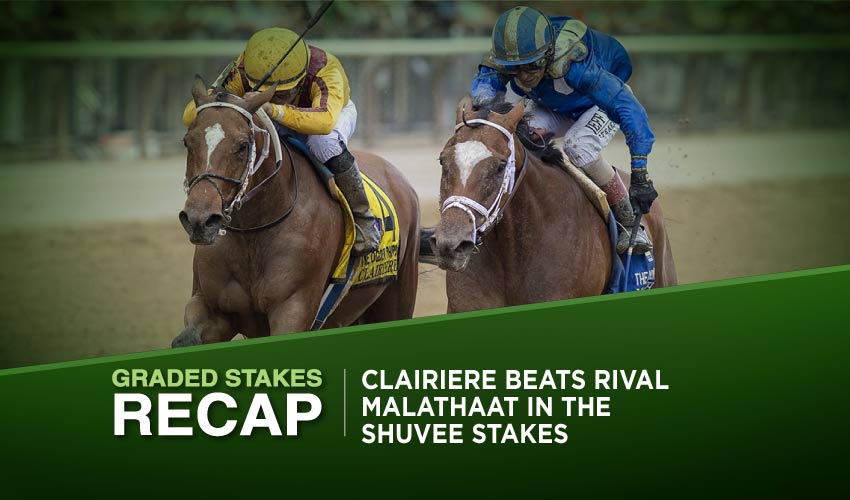 Just four horses headed to post for the running of this year’s Shuvee Stakes. Despite a lack of numbers, the race was still high on quality as two of the finest fillies in the United States prepared to lock horns once again.

Many were billing this as a showdown between Clairiere and Malathaat. Over the course of the season, these two fantastic fillies have swapped victories over one another, with the two fighting it out again for this year’s Shuvee Stakes.

Malathaat who is trained by legendary trainer Todd Pletcher entered the race as the favorite despite losing out to Clairiere when these two last met in the Kentucky Oaks.

It was believed by many that the Kentucky Oaks was a race perfectly suited to the closing speed and style of Clairiere and under a better tactical ride, Malathaat should have been able to turn the tables on her great rival.

It was expected that Malathaat would dictate the pace of the race and try to win the race from gate to wire, but one of the outsiders, Crazy Beautiful had other ideas.

Setting off at a hard gallop, Crazy Beautiful did her very best to stretch out the four-runner field. With some way to go, jockey John Velazquez on board Malathaat didn’t look pleased with how his fillie was traveling and had to urge his mount to keep up with the tough pace.

Having to work hard as the runners reached the final turn, Malathaat was making hard work of it. In stark contrast, the eye was drawn behind the vibrant yellow silks of the smooth traveling Clairiere.

Joel Rosario had put Clairiere in the perfect position and made his move as they rounded the home turn.

As they entered the final furlong and a half, Crazy Beautiful finally cracked leaving it to Malathaat and Clairiere to battle it out for the top prize.

As the runners hit the final furlong these two rivals locked eyes and got set for the final battle, but it wouldn’t come.

Having had to expend a bundle of energy earlier in the Shuvee Stakes, Malathaat just didn’t have the speed or engine to keep up with the relentless gallop of Clairiere and as the finishing line drew nearer, she shifted into another gear, leaving her rival in the dust.

Under a peach of a ride, Clairiere would go on to win the Shuvee by just over a length. All credit must be given to Malathaat who battled hard to the finish, but today simply wasn’t her day.

The win is Clairiere’s third of the season and a crack at the Breeders’ Cup Distaff might well be on the horizon. Despite the defeat, Pletcher might have similar plans for Malathaat and another clash between these great rivals could well be on the cards once again.