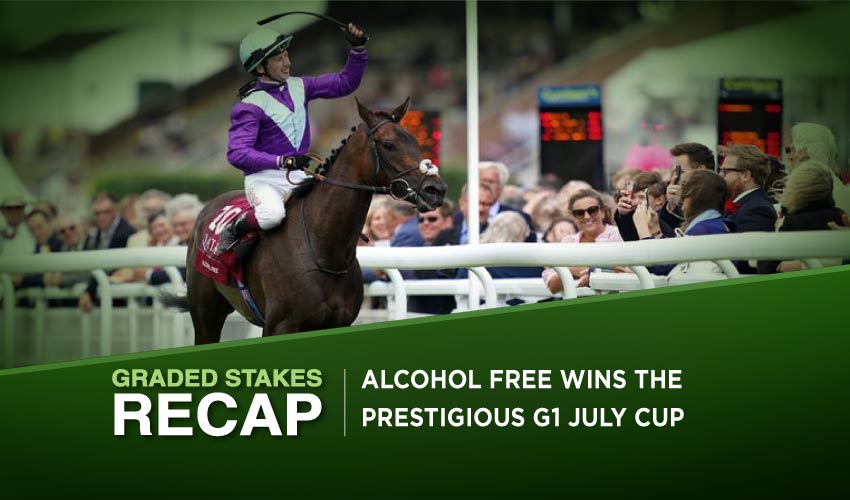 The three-day Newmarket July meeting drew to a close on Saturday with the marquee event of the week, and there was another longshot winner as the filly Alcohol Free emerged from the pack to win the G1 2022 July Cup. The highlight of the undercard was the G2 Superlative for two-year-olds, won by the unbeaten Isaac Shelby after a thrilling final-furlong duel.

Alcohol Free gets the party started

Another G1 at Newmarket, another surprise win, another filly. On Saturday it was Alcohol Free upsetting the applecart, showing unexpected speed to outrun an international field and win the prestigious July Cup.
The 14-1 chance was always in the clear from her wide draw and surged into the lead inside the final furlong, stretching away to win by a length and a half from second-choice Naval Crown, who had half a length to spare over the late-running Artorius. The favorite Perfect Power was never competitive, finishing seventh; the clock showed 1:09 and one-half.

“It won’t be an alcohol-free weekend,” said jockey Rob Hornby, winning his second G1 in two days following the upset victory of Prosperous Voyage in the Falmouth.

“I’m speechless. It’s crazy, really. I wasn’t sure if she was liking the going, but when she hit the rising ground she pulled away and won convincingly.”

Much better known as a miler, Alcohol Free was having just her second start back sprinting and had finished behind several of these rivals – including the second, third and fourth here – at Royal Ascot. However, these sprints are so often won not by the best horse but by the one in the right place at the right time, and Alcohol Free seized her chance to claim the rare distinction of winning G1s at two, three, and four.

The daughter of No Nay Never will now revert to her usual job, with trainer Andrew Balding aiming Alcohol Free at the G1 Sussex over a mile at Glorious Goodwood on July 27, a race she won last year. The opposition is expected to include the unbeaten Baaeed, the top-rated horse in Europe. “Wish us luck!” smiled Balding.

There was a thrilling climax to the Superlative when Isaac Shelby and Victory Dance went eyeball to eyeball through the final furlong, with the former getting the verdict by a head to maintain his unbeaten record.

The 3-1 third-choice of five was always in the front rank and Sean Levey sent him to the lead at the quarter-pole, but the favorite Victory Dance wouldn’t quit and the pair drove to the line in lockstep, drawing three and three-quarter lengths clear of third-placed Dark Thirty, stopping the clock in 1:25 and change.

“He’s a really special horse,” said trainer Brian Meehan. “I think there’s plenty of improvement in him, and the Breeders’ Cup is on my mind because the Juvenile Turf would suit him well.”
Meehan has already had success at the Breeders’ Cup, winning the Turf in 2006 with Red Rocks and again four years later with Dangerous Midge.

Follow us on Social Media for the 2022 July Cup & Superlative Stakes updates!