Nashwa claims her 2nd G1 victory in the 2022 Nassau Stakes 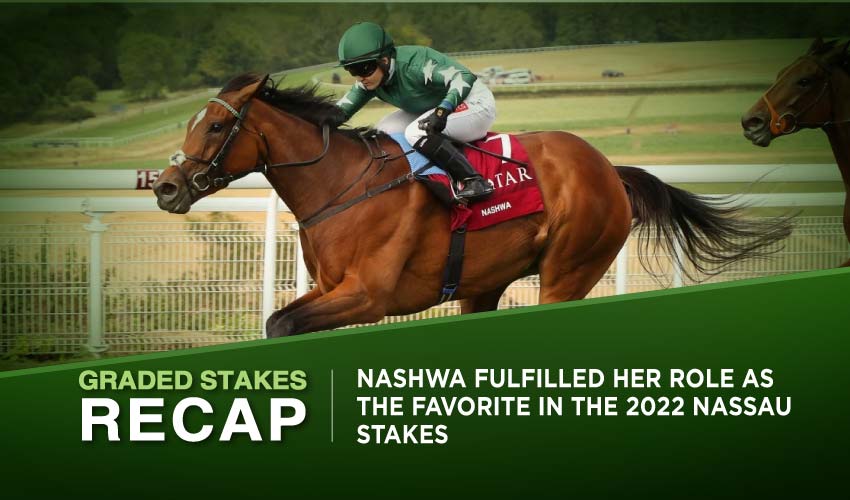 On Thursday, three Graded races were held at the Glorious Goodwood festival, with its pinnacle being the G1 Nassau Stakes for three-year-old and older fillies and mares. Nashwa didn’t allow an upset to happen as she scored decisively under Hollie Doyle, drawing on her brilliant performance from the French Oaks. The other Graded events also saw victories of favorites as Royal Scotsman bagged the G2 Richmond Stakes and New London prevailed in the G3 Gordon Stakes.

The G2 turf race attracted a field of eight two-year-old colts and gelding who covered the distance of six furlongs. In the fight for the purse of £150,000, Royal Scotsman (5-6) was the leading chance here, and in the end, he managed to fulfil the role of a favourite under Jim Crowley.

The Paul & Oliver Cole bound colt travelled in the pack and waited for a gap to open, which happened in the closing stages. Subsequently, the big son of Gleneagles was urged forward, took command, and cruised home smoothly to record his premiere G2 triumph. He crossed the wire in 1m 9.66s, leaving second Al Karrar (6-1) in second by one and ½ of a length, with Chateau (3-1) snatching up third place.

Royal Scotsman delivered a fine (and expected) performance on Thursday as his previous results suggested he was a Graded victor in the making. After bagging a novice race, he bumped into some serious two-year-olds in the G2 Coventry Stakes, where he denied the odds and finished third, also bettering talented Blackbeard, and therefore, Royal Scotsman seemed ready to grab some Graded glory for himself as well.

He looks like a smart colt for the future alongside Al Karrar, whose finish was eye-catching, while Chateau didn’t run a bad race, too; still, he took third place at the last possible moment before weakening Crispy Cat (12-1).

In the field of three-year-olds, New London (6-4) regained his spark and triumphed in the G3 turf race over the distance of a mile and a half. Vying for the purse of £200,000, the Charlie Appleby trained giant bay settled in the midpack as the field stretched out enormously; however, when the colts arrived at the final stretch.

William Buick asked New London to improve his position and challenge the leaders. Once the son of Dubawi had enough room in front of himself, he picked up, rallied down his rivals, and in the end, left behind brave Hoo Ya Mal (6-1) to score in 2m 33.80s. Deauville Legend (14-1) unfolded his late finish in time to snatch up second place at least, sentencing Hoo Ya Mal to third place.

The victorious bay looked the real deal at the beginning of the season, but when posed with serious rivals in an Epsom Derby trial, he failed to maintain his unbeaten record and finished second, well beaten back then.

Still, his following performance in a treasured handicap was superb as he delivered easily, upon which New London continued winningly on Thursday. After his gutsy victory, New London seems to be ready to get a go for St Leger together with both mentioned opponents as Deauville Legend and Hoo Ya Mal also gave fine efforts and might be viable contenders for the last Classic race of the British Flat season.

Thursday’s card was headlined by this G1 turf race open to three-year-old and older fillies and mares who competed for the purse of £600,000. Also, this event over a mile and a quarter saw the triumph of a favorite as Nashwa (6-5) displayed a brilliant turn of foot in the final stretch to bag her second G1 victory by 2m 5.77s.

Galloping in the rear of the field, the three-year-old filly relaxed throughout the race, but as soon as Hollie Doyle took her outside, the bay filly went forward willingly. The John & Thady Gosden bound daughter of Frankel gradually left all her rivals behind and recorded a smooth win by one and ¾ length before Aristia (40-1). The outsider put up a bold performance, also bettering third Lilac Road (15-2).

Hollie Doyle hailed her mount as the horse of her life, and it’s really no wonder just by the simple look at how easily Nashwa bagged her second G1 triumph. Big things lie ahead of this beautiful bay with a straightforward nature, and it’ll also be interesting to watch second Aristia, a Listed winner, whether she will draw on that performance and, alongside Lilac Road, maybe become a decent Graded runner.

Follow us on Social Media for more Goodwood updates!