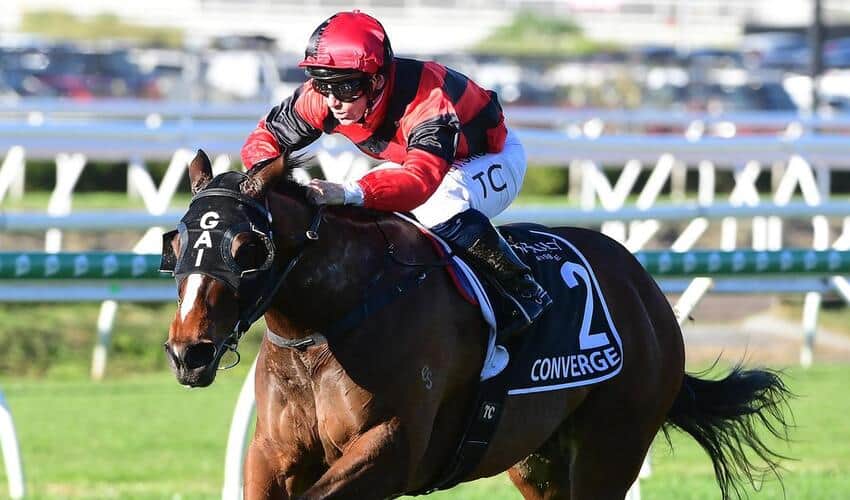 2021 JJ Atkins results over the mile Last Saturday turned into a profitable day for punters at Eagle Farm as Gai Waterhouse and Adrian Bott’s lightly-raced gelding Converge took out the Group 1. A field of 14 juveniles lined up with $1 million in prize-money on the line; only to come up short to son of Frankel, who produced an eye-catching turn of foot out wide to salute as the $2.90 favorite.

In just his seventh career start; Converge was looking to improve on his run a fortnight prior when a narrow runner-up to Saturday’s rival Tiger Of Malay in the Group 2 Sires’ Produce Stakes over shorter. The promising gelding burst onto the scene late last year with a win at Warwick Farm on debut before returning to the races earlier this year to contest some tougher races in Sydney

The soft draw allowed Tim Clark to settle behind the speed out of the gates before creeping up out wide entering the final turn. From there, Clark pressed the button with 300m to spare as the duo shot clear from the rest of the field to win by a comfortable margin.

The future looks bright for Converge as the Bott and Waterhouse team begin their plans for the spring, “We were able to get all the favors in the run and we were very happy throughout.” “We can sort of really go home and dream tonight what could really be possible for his three-year-old career,” “I think the way we’ve seen today and the way he settles in his races he’s certainly got the scope to improve over further; so that certainly opens up a lot more options for him going forward.”

The J J Atkins – Queensland’s premier race for two-year-olds – has a very long history… and certainly not always as the J J Atkins! First run in 1893; for most of its history the race was known as the Claret Stakes; before it was changed to the Marlboro Stakes for sponsorship in 1976. It then became the Castlemaine Stakes in 1983; the Channel Nine Stakes in 1988, the Castlemaine Stakes again in 1989, and the QTC Classic 1995.

In 1999 the race was renamed the TJ Smith after the legendary trainer; before it was yet again changed in 2013 to the J J Atkins – in honour of legendary Queensland trainer Jim Atkins.

In its very early days the race was contested over six furlongs (approximately 1200 metres), before extending to seven furlongs (1400 metres) in 1905 and a mile in 1955. It’s remained at the mile – or its metric equivalent 1600 metres – since. It’s rare to see two-year-olds racing out to this distance; there is just one other Group 1 two-year-old mile race in Australia (the Champagne Stakes at Randwick), and just five Black Type mile races for two-year-olds in total.

Follow us on Social Media for instant 2021 JJ Atkins updates!