ADAYAR SOARS AWAY TO A CLEAR VICTORY AT EPSOM DOWNS 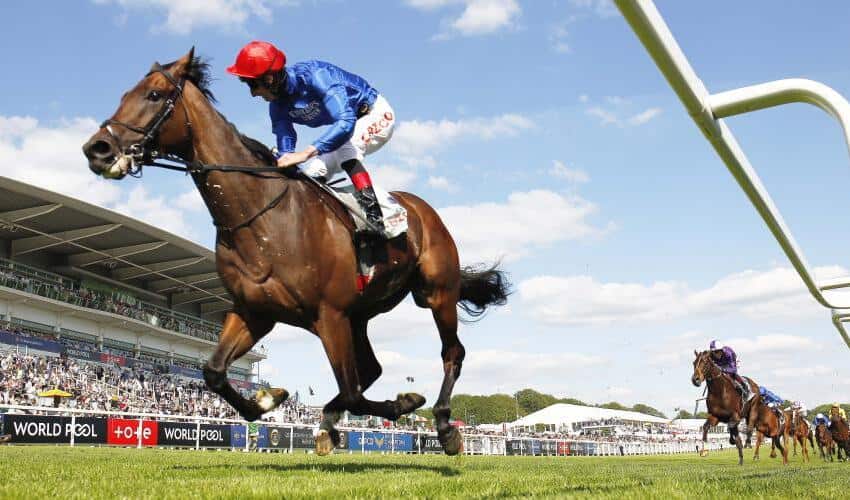 Adayar sprang a 16-1 surprise as he came home a wide-margin winner of the Cazoo Derby at Epsom Downs. Trained by Charlie Appleby and ridden by Adam Kirby; the Godolphin-owned son of Frankel shot clear in the final furlong to give his handler a second win after Masar in 2018.

Mojo Star finished well from off the pace to take second; with Hurricane Lane also keeping on at the one pace for minor honours; but Adayar prevailed by four and a half lengths. Kirby was looking forward to having just his second Derby ride aboard one of the top choices, John Leeper; a horse he had guided around Epsom’s strange contours in a gallop just nine days earlier.

Excitement turned to dejection when Frankie Dettori became available, and John Leeper’s connections switched riders. Kirby was suddenly without a Derby mount—but not for long. Godolphin’s principal British trainer Charlie Appleby had wanted to use one of the operation’s most faithful servants all along. This time Kirby’s pleasure meant pain for dual champion jockey Oisin Murphy; left to watch from the sidelines as the outsider he had expected to steer gave Sheikh Mohammed’s stable a second Derby success within the space of three years.

Adayar proved massively superior to his 10 rival the most fancied of which, Bolshoi Ballet , could finish only seventh but he was matched in magnificence by Kirby, who bravely maneuvered his mount into a gap between Gear Up  and the fence just under three furlongs from home. From that moment onward, there was only one Derby winner.

Speaking after Adayar’s victory in the Derby, winning trainer Charlie Appleby said: “All the credit goes to Sheikh Mohammed and Team Godolphin.

“We spoke on Wednesday night after the horses did their breeze in the morning and I’ll be honest, I said to His Highness I couldn’t be happier with them all, but I did feel this horse was more a Leger horse, and he said ‘Charlie, run him, there’s only one Derby.

“But from the team’s point of view, it’s fantastic, they all work so hard.

“I’m delighted for Adam, it was a fantastic ride and it’s something all jockeys want to achieve.”

The Derby Stakes, also known as the Epsom Derby or the Derby, and as the Cazoo Derby for sponsorship reasons, is a Group 1flathorse race in England open to three-year-old colts and fillies. It is run at Epsom Downs Racecourse in Surrey on the first Saturday of June each year, over a distance of one mile; four furlongs and 6 yards (2,420 metres) It was first run in 1780.

It is Britain’s richest flat horse race, and the most prestigious of the five Classics. It is sometimes referred to as the “Blue Riband” of the turf. The race serves as the middle leg of the historically significant Triple Crown of British horse racing, preceded by the 2000 Guineas and followed by the St Leger; although the feat of winning all three is rarely attempted in the modern era due to changing priorities in racing and breeding; and the demands it places on horses.

Follow us on Social Media for instant Epsom Downs updates!