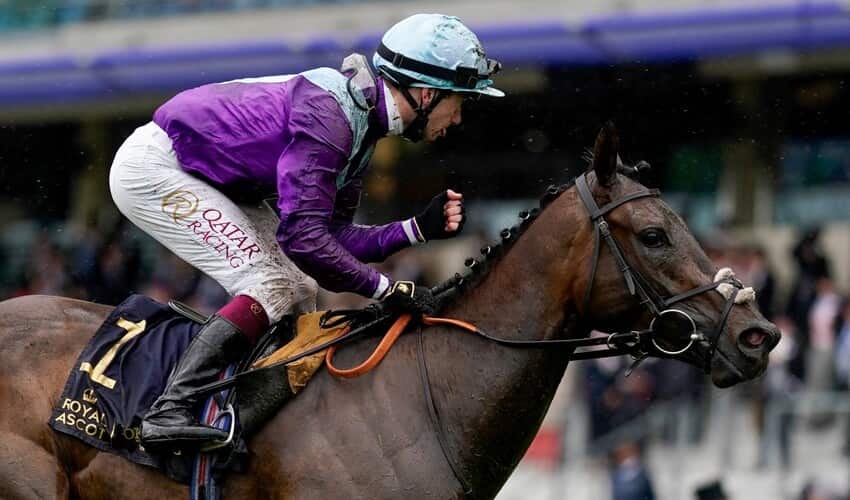 Oisin Murphy rode Alcohol Free to Coronation Stakes victory; minutes after he was placed to second place aboard Dragon Symbol in the Commonwealth Cup following a stewards’ inquiry. The Andrew Balding-trained filly was fifth in the QIPCO 1000 Guineas on her latest start; but turned the tables on the winner that day, Mother Earth (9/2), who finished third. Second place went to Snow Lantern (14/1), a length and a half behind the winner.

Alcohol Free racing in the famous Jeff Smith silks gave Balding a 109.5/1 Friday Royal Ascot double; and a third winner of the week. Murphy was also scoring for the third time this week; joining Frankie Dettori at the head of the leading jockey standings.

“I didn’t get a chance to stress ahead of Alcohol Free. I had a plan and I don’t know if Andrew agreed me; but he filled me with confidence when I told him what I was going to do. “She jumped normal and what worried me was the clerk of the course decided to put the stalls on the far rail. That was fine; but then everyone wants to get to that rail; so it is congested and I was worried it was going to get congested.

Speaking about coming out for the Coronation Stakes straight after the outcome of the stewards’ enquiry; he added: “I said to my valet when he put his hand around me: ‘there’s no place for tears in here. There are far worse things going on in the world; we’re in the entertainment industry, and I’m steering these marvelous animals and keep looking forward to the next one’.”

The event was established in 1840. Its title commemorates the coronation of a new British monarch, Queen Victoria, two years earlier. The present system of race grading was introduced in 1971; and for a period the Coronation Stakes held Group 2 status. It was promoted to Group 1 level in 1988