DANON KINGLY EARNS HIS BERTH IN THE BREEDERS’ CUP 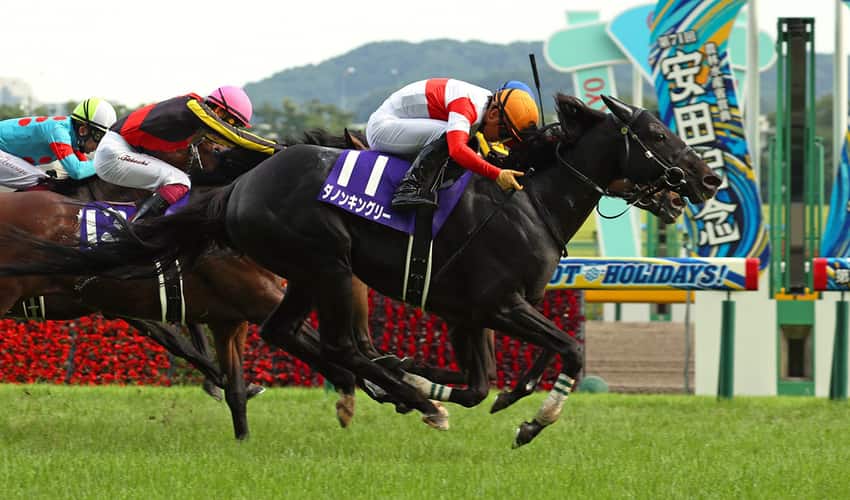 Danon Kingly broke through for his first Grade 1 victory on Sunday June 6th, in the Yasuda Kinen; beating favorite Gran Alegria by a head at Tokyo Racecourse.  Starting as eighth favorite, the 5-year-old; ridden by Yuga Kawada, held off the fast-finishing Gran Alegria in a frantic ending to the 1,600-meter race for 3-year-olds and up, completing the race in 1:31.70 seconds. German 3-year-old Schnell Meister, the fourth favorite, crossed the line half a length back in third.

As the field raced down the backstretch, jockey Yuga Kawada kept Danon Kingly snug in mid-field. Around the one sweeping turn and into the stretch, Kawada got Danon Kingly out toward the center of the course and found daylight for a late dash to the finish. Danon Kingly started his career with great promise, notching three consecutive wins before finishing third in the 2019 Satsuki Sho (Japanese Two Thousand Guineas, G1) and second in the Tokyo Yushun (Japanese Derby, G1). Things then went south and trainer Kiyoshi Hagiwara called a timeout for Danon Kingly when a 12th-place finish in the Tenno Sho (Autumn, G1) Nov. 1 capped a series of disappointments. That pause in his career stretched out as maturity came with some physical setbacks during training.

Sired by champion thoroughbred Deep Impact, Danon Kingly had five wins from 11 previous starts; including a victory in the Grade 2 Nakayama Kinen in March last year.  The Yasuda Kinen is a “Win and Your In” Breeder cup challenge event and the winner earner a spot in the BC Mile (Turf).  The first three finishers in the Yasuda Kinen also earned entry to France’s top mile races, the Prix Jacques le Marois (G1) and Prix du Moulin de Longchamp (G1).

“Recently; he’s had to pass on races he was set to run in, so the most important thing has been getting him in condition that is suited to the race he’s aimed for”I see improvement. But; hand in hand with his maturing as a 5-year-old has been greater damage incurred in hirecent races, so we’ll have to wait and see how he performs to be able to talk about how maturity is affecting him.”