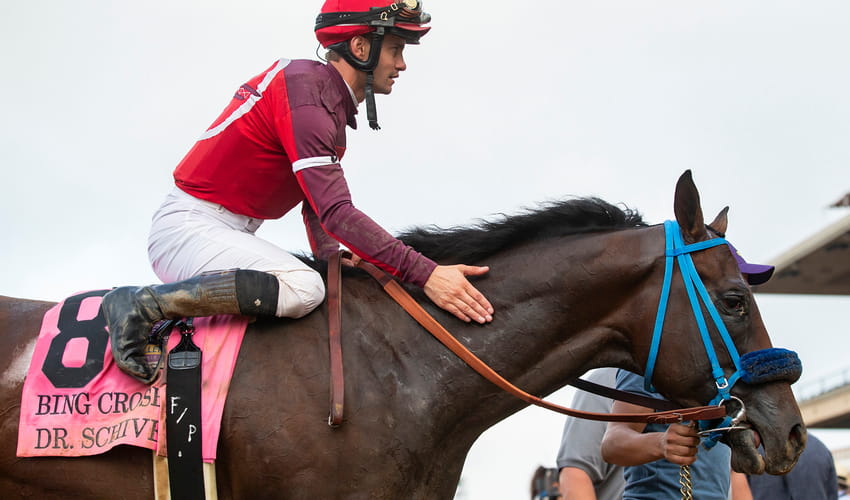 Red Baron’s Barn, Rancho Temescal, William Reeves and partners Dr. Schivel, a 3-year-old taking on older rivals, made the lead in midstretch, then hung extra tough late to capture the 76th running of the Grade 1 Bing Crosby Stakes by a neck Saturday at Del Mar racetrack in Del Mar; Calif. The victory in the Breeders’ Cup Challenge Series Win and You’re In contest gave Dr. Schivel a fees-paid berth in this year’s Breeders’ Cup Sprint

The son of Kentucky sire Violence gave his jockey and trainer a unique double in the $301,500, six-furlong dash – back-to-back scores in the shore track’s premier race for sprinters with 3-year-olds; something that’s never happened before. The final time in the dash was 1:10.47.

Flavien Prat, Del Mar’s leading rider, was aboard the colt for his fourth victory of the day. He now has 17 wins in the first nine days of racing and also a remarkable streak in the Crosby: he’s won six of the last seven runnings of the race. Mark Glatt is the trainer of Dr. Schivel and he also was the conditioner of last year’s winner, the then 3-year-old Collusion Illusion (who was entered and scratched in this year’s Crosby).

Dr. Schivel, who was making only the sixth start of his career, scored his fourth victory and picked up a winner’s check for $180,000 and increased his bankroll to $416,000. The bay youngster had won last year’s Grade 1 Del Mar Futurity for former trainer Luis Mendez, then was put on the shelf for nine months before coming back to win an allowance race at Santa Anita in June.

“No special instructions; just ride. He broke well, then when we went across the gap, he grabbed the bit. Dr. Schivel was running well, pretty much all the way around. He was game late. Good win.”

They went fast early, maybe not as fast as we thought. Flavien (Prat) rode him perfectly, gave him a good trip, and the outside post was a benefit. This is a real racehorse. He beat the olders today, and hopefully in November he’ll be able to do it again. (Scratch of Collusion Illusion?) He grabbed a quarter training yesterday and he just wasn’t perfect on it today. It probably would have been safe to run him but the ownership group and I thought it was best to err on the conservative side and have him run another day.”

Make sure to check Horse Racing Tote for all the latest horse news, racetrack entries, horse racing results, horse betting odds and so much more.

Follow us on Social Media for instant Dr. Schivel updates!