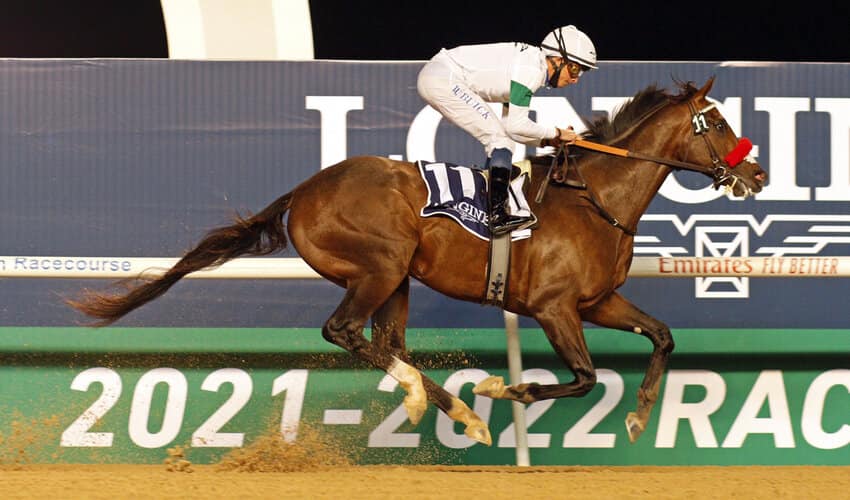 The Al Maktoum Challenge R2, contested over 1,900 meters, was the first steppingstone for Hot Rod Charlie toward the ultimate goal of him taking the Dubai World Cup. In his first outing since running second in the Dec. 26 San Antonio Stakes (G2), the son of Oxbow gave the Dubai crowd a quick primer on what has been his bread and butter: sit near the front end and fight anyone who tries to deny him.

The $12 million Dubai World Cup is March 26 at Meydan. A repeat trip there and Hot Rod Charlie will have his second Grade/Group 1 victory — along with a hefty deposit to an earnings account that already is north of $2.7 million. Last year’s Dubai World Cup winner, Mystic Guide, banked $7.2 million out of the $12 million purse.

It’s been such a great journey, said O’Neill:

“We took a little different approach with him, we didn’t train him too hard going into this. However, we knew we had plenty of time to get him ready for the Dubai World Cup.

“It was a special night for sure. He’s a horse who’s just loaded with class. It was a strong field tonight. William rode him with a ton of class and a ton of confidence

He is a very versatile horse and we are positive he will have a good performance in March.

Make sure to stay tuned for the latest racing odds, and Dubai World Cup entries. Sign up and get a 10% rebate.