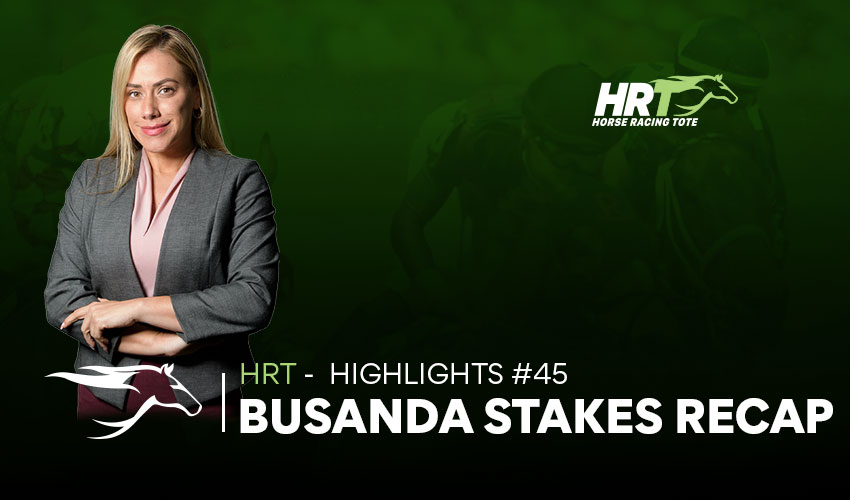 In HRT we bring the latest information about horse racing. In this episode, we will look at racing across the US starting with the three-year-old fillies looking toward the Kentucky Oaks. Here are our HRT Highlights #45.

The 9 furlongs Busanda took place at Aqueduct on a track rated good and that describes the performance by the Chad Brown-trained Occult.

The filly went off at 7/5 and handily defeated the field by 4 lengths under Dylan Davis.  Occult currently sits at 30/1 in the Jazz Sports Kentucky Oaks future book.

Michael McCarthy has won 276 races in his training career but had never won a race in the state of New York until Saturday.  Lugan Knight went off as the third choice with odds of 7/2 and scored a front-running victory in the Jerome stakes holding off favored Arctic Arrogance.

Dylan Davis rode and the time for the mile over a muddy Aqueduct surface was 1 minute 37.77 seconds.  Lugan Knight is now 65/1 in the Derby Future Book.

The Baffert barn sent out a 3.55 million dollar purchase Hejazi, who was making his fourth career start at Santa Anita and despite breaking, slow broke his maiden under Mike Smith in a fast time of 1:08.41.  Fellow Baffert trainee Worcester closed late to finish second. Hejazi is 60/1 and Worchester 85/1 in the Kentucky Derby Future Book.

Shoppers Revenge dazzled the Oaklawn Park crowd with a 5 length victory in a maiden race for trainer Steve Asmussen and jockey Ricardo Santana.  The grey son of Tapit was making his second start and now sits at 85/1 in the future book.

Keep up with Horse Racing Tote and anticipate the latest Pegasus Cup Odds. We offer the World’s major Racetrack Results. Sign-up and get up to a 10% horse rebate. We offer the best horse rebate, in the Business!

Take advantage to our free Horse Betting Guide and become a winner today. We offer a guide for all levels!

Follow us on Social Media for more Kentucky Oaks updates!