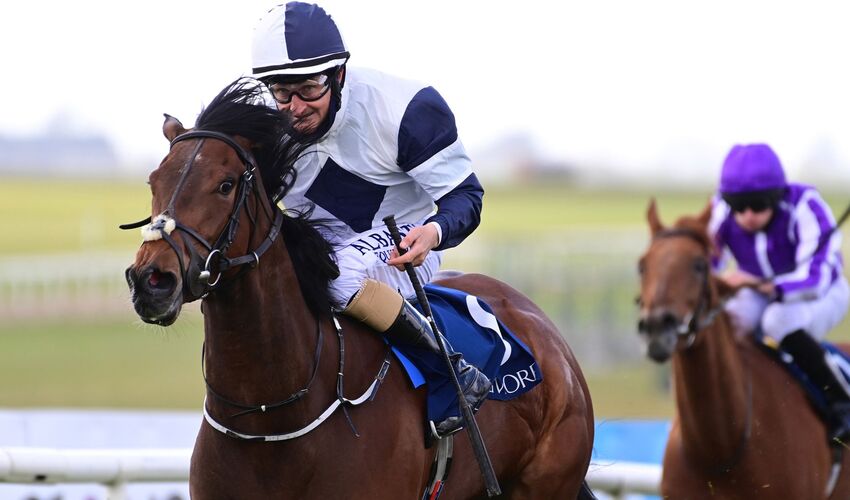 After an eventful opening race involving a loose horse; there was further drama in the Coolmore America ‘Justify’ Matron Stakes as No Speak Alexander sprang a 25/1 surprise in the hands of Shane Foley.

The daughter of Shalaa raced in third from an early stage and challenged the leaders from two furlongs out. She hit the front just outside the furlong marker and ran on well to hold the sustained challenge of Pearls Galore by a neck.

The drama surrounded the run of the 6/5 favourite Mother Earth who had raced behind the eventual winner until the straight.

Ryan Moore tried to challenge between the weakening leaders and the winner in the straight but, with Foley riding tight; he was unable to secure a clear passage and a check inside the final furlong as Foley’s mount edged towards the rail under a right hand drive finally put paid to the market leader’s chance.

She was eased close home to finish third, a length and a quarter behind the runner-up.

The placings remained unaltered after a stewards’ enquiry.

Besides Matron Stakes No Speak Alexander has won

No Speak Alexander had won the Athasi Stakes first time out this season at the Curragh Racecourse before finishing third in the Irish 1,000 Guineas. On her previous start she had finished well behind the winner Mother Earth in a Group One at Deauville when; herself, meeting with significant interference.

Winning trainer Jessica Harrington said: “It was her day in the sun today; everything was right, and she really came on from the last day.

“She got no run in France at all, she got knocked over a furlong down.

“We trained her for this day and we rode her the same way as we did in the Guineas, up at the sharp end.

“She’s probably got a little bit stronger. She likes a bit of nice ground. We’ve no idea where we’re going now, this was the plan and we’ll enjoy the day.”

Follow us on Social Media for instant Matron Stakes updates!