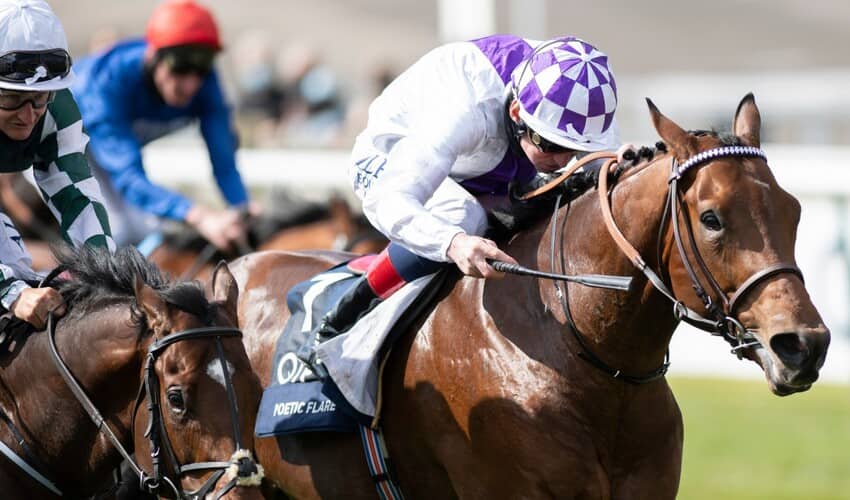 Poetic Flare stole the show on the opening day of Royal Ascot 2021 as he produced a devastating display in the G1 St James’s Palace Stakes. The race; restricted to three-year-olds over the round mile; looked competitive on paper but proved anything but with 54-year-old jockey Kevin Manning and his mount travelling with confidence before clearing away for a four and a quarter length victory.

Lucky Vega (4/1) chased the second place, with Battleground (11/1) a neck further back in third.

Poetic Flare was a dominant winner at QIPCO 2000 Guineas; Bolger suggested after his colt success that he was the first horse he had trained that might be able to win all three Guineas in England; France and Ireland. As it turned out he was unplaced in Paris and edged out by Mac Swiney, another Bolger-trained runner; at the Curragh, but the 79-year-old trainer’s belief in his colt was fully rewarded here.

“The ground is what this horse needs. You want that good, quick ground and that’s what we got today, and he showed how good he is. He travelled very well; there was a nice, even pace in the race and always something to aim at. He just travelled so easy into the race, and when I asked him to pick up, he put the race to bed in a matter of strides.”
“I couldn’t believe that I was travelling so well and was half sitting down rather than having to go forward. He’s an unbelievable horse. He’s a very tough individual who does himself very well. He has taken his racing very well

The event is named after St. James’s Palace, a royal residence during the Tudor period. It was established in 1834, and the inaugural race was a walkover.

The present system of race grading was introduced in 1971, and for a period the St. James’s Palace Stakes was classed at Group 2 level. It was promoted to Group 1 status in 1988.

The St. James’s Palace Stakes usually features horses which ran previously in the 2,000 Guineas, the Poule d’Essai des Poulains or the Irish 2,000 Guineas. It is contested on the opening day of the Royal Ascot meeting.

Follow us on Social Media for instant Royal Ascot updates!