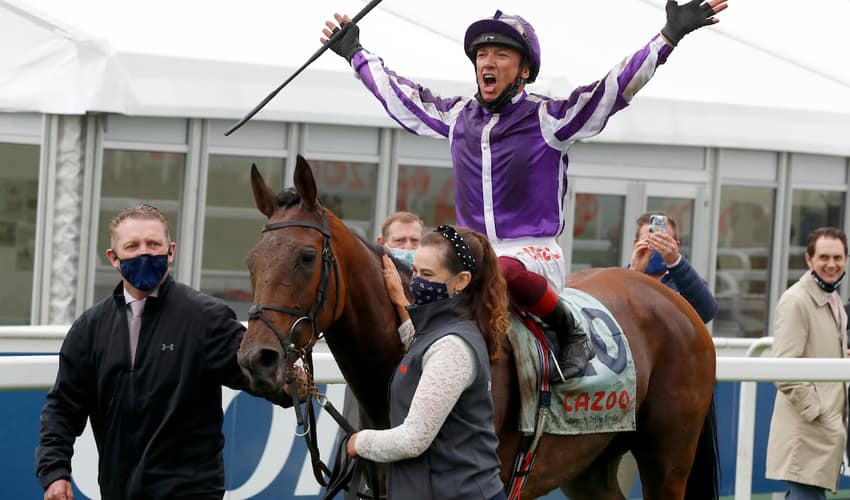 It was a 40th British Classic victory for Aidan O’Brien, plus a ninth Oaks win for the trainer.  It sealed a 40th British Classic for master trainer O’Brien, equaling the all-time record held by trainer John Scott, set between 1827 and 1863. It was a 21st such success for jockey Frankie Dettori – to place him alongside the legendary Fred Archer.

There was a steady pace throughout the leading stages as Sherbert Lemon and eventual second Mystery Angel dictated from the front. Having passed Tattenham Corner runners switched to the standside as jockeys one-by-one decided to play their cards. Mystery Angel, running a huge race, caught plenty of her rivals out as many found themselves several lengths behind. As sticks were drawn, it was clear that the ice-cool Dettori had plenty under the bonnet.

Using hands and heals he began to nurse Snowfall to the front. Her response was emphatic, and she powered away with ease. The Epsom crowd, who had waited so long to return to racing here we treated to an astonishing display. The more Frankie urged, the wider the gap became until all rivals disappeared into the distance.

She was unbelievable Frankie Dettori said

She looks a very exciting filly for this year. I was talking about the Irish Oaks (G1) but Frankie said don’t be afraid to take on the older horses with her and don’t be afraid to do it early.” She has plenty of speed, and I didn’t think she’d necessarily want a mile and a half, but looking at that she gets it on her ear. As she goes up in trip she’s only getting more impressive.

Is a Group 1 flat horse race in Great Britain open to three-year-old fillies. It is run at Epsom Downs over a distance of 1 mile, 4 furlongs and 6 yards (2,420 metres), and it is scheduled to take place each year in late May or early June. It is the second-oldest of the five Classic races, after the St Leger.

Officially the Cazoo Oaks, it is also popularly known as simply The Oaks. Increasingly it is coming to be referred to as the Epsom Oaks in both the UK and overseas countries, although ‘Epsom’ is not part of the official title of the race. It is the third of Britain’s five Classic races to be held during the season, and the second of two restricted to fillies. It can also serve as the middle leg of the Fillies’ Triple Crown, preceded by the 1000 Guineas and followed by the St Leger, although the feat of winning all three is rarely attempted.

The winners over the last 5 years

Follow us on Social Media for instant Epsom Oaks 2021 updates!