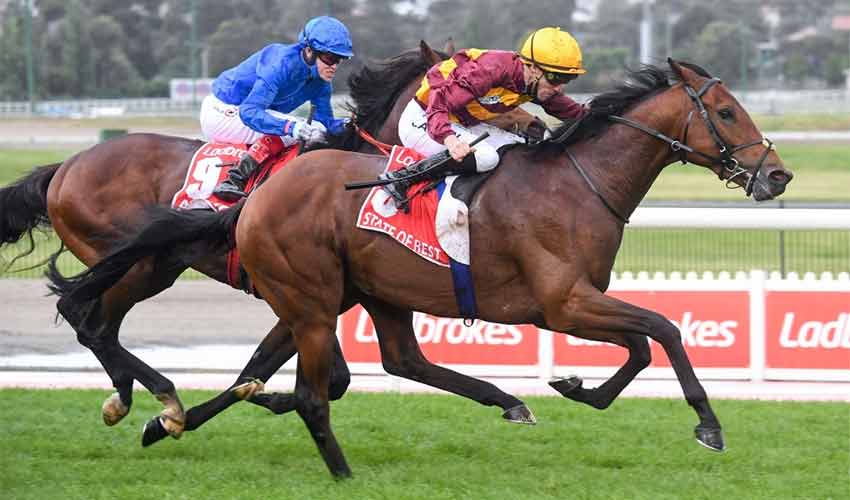 With the two favourites scratched from the great race, the Cox Plate has produced a race for the ages that took an age to decide.

International galloper State Of Rest has held off Godolphin’s Anamoe in a dramatic protest to be crowned the Cox Plate champion of 2021.

The four-year-old, trained by Joseph O’Brien, won the $5 million race by a short head, with Anamoe, Verry Elleegant and Mo’unga filling the minor placings.

The first two horses had pulled away from the rest of the field and it was a head bobbing finish, with State of Rest the first past the post.

However, Anamoe’s connections fired in a protest just minutes after the running of the race, claiming interference in the final stages.

Replays showed that State of Rest had shifted in the straight, causing Anamoe to be disadvantaged.

30 minutes after the race there was still no official confirmation of the winner, however shortly after the protest was dismissed in favour of the international galloper.

Anamoe was looking to become the first horse in 37 years to complete the Caulfield Guineas/ Cox Plate double, after winning the three-year-old race a fortnight ago.

State of Rest seems to have taken his journey and preparation well ahead of the race so we’re looking forward to seeing how he gets on,”

“He’s drawn in stall eight and I don’t think that will be too bad for him. It would be great if he could run well and pick up some of the prize-money.”

He added: “We obviously know Johnny well and he won a group 3 for us on Downdraft a couple of years ago at Flemington. He’s a top rider so we’re delighted to have him.”

Follow us on Social Media for instant Cox Plate updates!