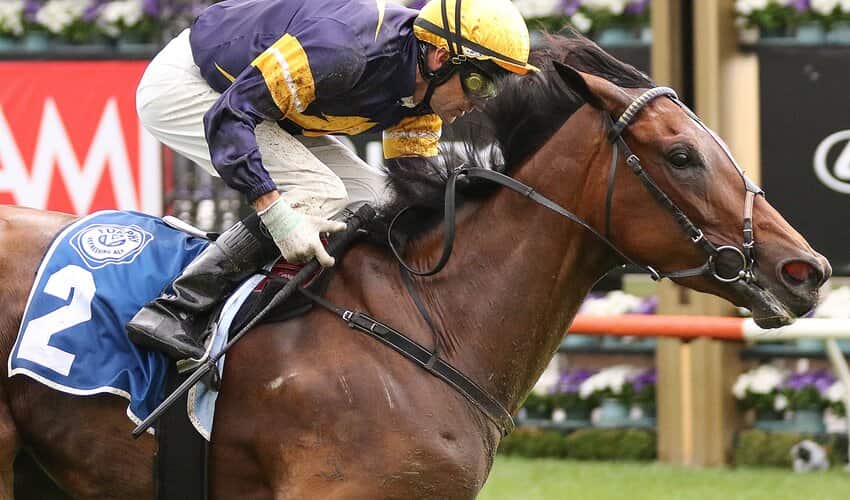 Jockey Craig Williams’ determination to gain the ride on group 1 winner Tofane was rewarded when the valuable mare won the June 12 Stradbroke Handicap (G1); her second victory at the highest level, potentially staving off her racetrack retirement by 12 months.

Trainer Mike Moroney; elected to not overtax the rising 6-year-old daughter of Ocean Park, last year’s All Aged Stakes (G1) winner; due to an injury setback after her spring preparation which saw her resume in the Sapphire Stakes (G2) in April before venturing to Queensland for the carnival.  Connections of Tofane made the last-minute decision to withdraw the mare from the Magic Millions National Broodmare Sale; where she was expected to make at least AU$2 million; to instead race her on for at least the Queensland winter carnival.

Williams settled Tofane ($12) in behind the tempo in the 1,400-meter 7f event and was able to overhaul Kingsford-Smith Cup (G1) winner Vega One in the final strides to win by half a length. Signore Fox was a short neck away in third

“After her run last time, we were looking at potential Stradbroke horses. When Philip Stokes decided Instant Celebrity wasn’t going to come up here; after Tofane’s last run I said get me on that horse please, I think she can win for us,” “I love the way Mike has spaced her runs, she’s now a dual Group 1 winning mare,” “I had to try and restrain her throughout the race because she got a bit inconvenienced throughout, but late she was really strong and very gallant, I’ve got to thank her performance, she was the horse that wanted to win more than any one.”

There’s plenty of highlights across the Brisbane Winter Racing Carnival, but there’s little doubting the premier race of the season: the Stradbroke Handicap. At $1.5 million in prizemoney, the Stradbroke Handicap is Queensland’s richest race outside of the restricted Magic Millions two-year-old and three-year-old events, held on the Gold Coast each January

Run over 1400 metres at Eagle Farm Racecourse, the race attracts some of Australia’s best sprinters and is the feature race on the biggest day of the Winter Carnival. Other Group 1 races held on Stradbroke Day are the J J Adkins Plate for two-year-olds, and the Queensland Derby for three-year-olds.

There have been several jockeys who won the race twice since 1983; those being Craig Williams, Chris Munce, Danny Nikolic, Gary Palmer, Jim Cassidy, Kerrin McEvoy and Stephen King. 1999 Melbourne Cup-winning hoop John Marshall also won the Stradbroke twice in consecutive years in 1988 and 1989 but sadly passed away at just 50 years of age in 2018.

More recently; the Stradbroke was moved to nearby Doomben Racecourse in 2015, 2017 and 2018 due to ongoing issues with the renovation of the Eagle Farm track. The race returned to Eagle Farm successfully in 2019.

Follow us on Social Media for instant Non US updates!