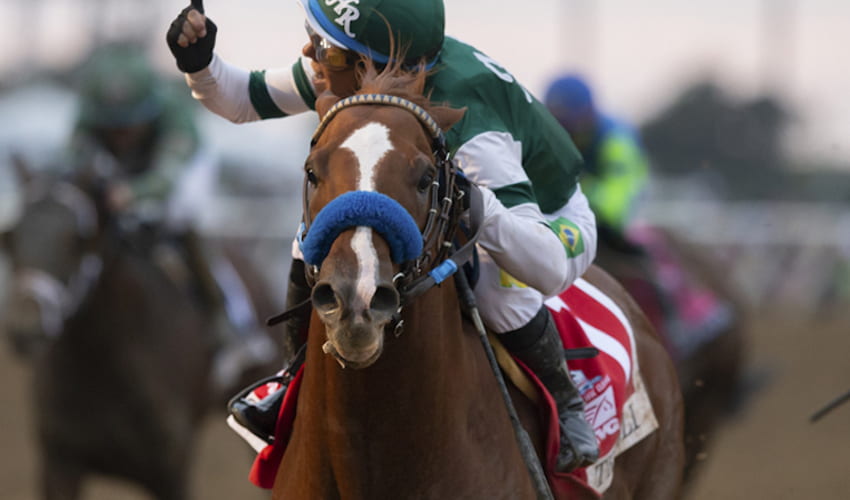 The 44-year-old Pereira, a native of Brazil, expertly guided Tripoli to a 11/4-length victory in the $1 million Pacific Classic to give trainer John Sadler and the 4-year-old Kitten’s Joy colt’s owners, Hronis Racing, their third victory in the track’s signature race in the past four years.

The victory was the first in a North American Grade 1 race for Pereira, a 44-year-old native of Brazil who came to the U.S. in 2014. Winner of more than 2,000 races prior to his arrival in the U.S., his biggest win came in the $10 million Dubai World Cup in 2010 aboard Gloria De Campeao.

The Pacific Classic is a Breeders’ Cup Challenge Series Win and You’re In race, giving the winner automatic, fees-paid entry into the Breeders’ Cup Classic, to be held at Del Mar on Nov. 6.

Trainer John Sadler told me before the race to be careful, because there were a lot of runners who had a similar style of running, Pareira said. “So, I was okay running right behind the leaders.  When it was time to run, I had plenty of horse.  But once we got in front, he started looking around, waiting on other horses.  I looked around and knew we were not going to get caught.  This was my only mount today, so I was really focused.  I am so happy.”

“He looked good all the way,” said Sadler. “He broke on his feet so (jockey Tiago Pereira) was able to tuck him in there and he looked comfortable all the way around. When (Independence Hall) started to slow up we were in a good spot. He had a perfect trip, give the rider a lot of credit. He rode him perfectly.”

Follow us on Social Media for instant Tripoli updates!