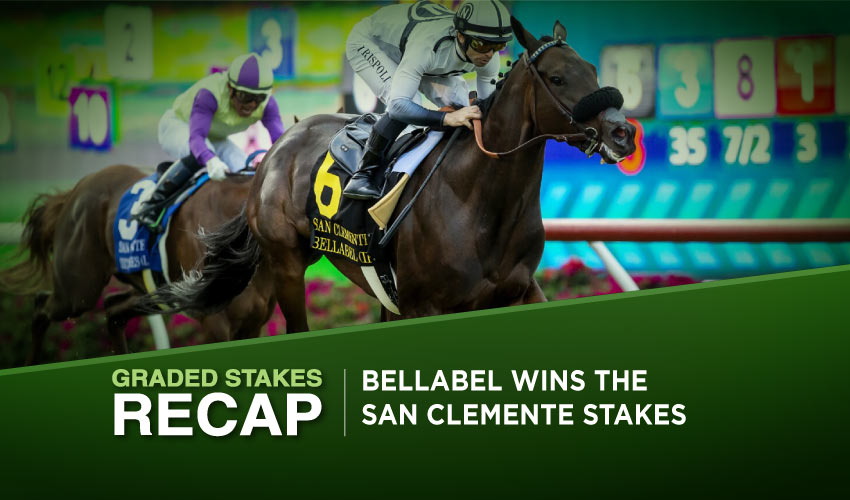 Some interesting Graded races were held on Saturday, while in this article, we discuss the G2 Connaught Cup Stakes, run at the Canadian track at Woodbine, and the G2 San Clemente Stakes, seen by the spectators at the Del Mar Race Course. The former turf event went superbly for the ex-Brazilian trained Filo Di Arianna, who delivered a wire-to-wire success, and the latter resulted in the great success of trainer Philip D’Amato whose Bellabel led home a trio of his charges.

The G2 turf race welcomed a field of ten three-year-old and older horses who covered the distance of seven furlongs here. Competing for the purse of $175,000, Filo Di Arianna (7-5) superbly used the weight advantage over some rivals and fulfilled the role of a favorite from the front.

Luis Contreras allowed the keen six-year-old to set the pace, while in the final stretch, the Mark Casse-bound chestnut scooted clear from his rivals, and in the end, he triumphed in 1:20.36.

The son Drosselmeyer scored easily by two and ½ of a length before the second March To The Arch (6-1) and third Silent Poet (53-10).

After achieving some successes in his homeland of Brazil, Filo di Arianna failed to shine in both Graded starts in spring; however, he won an Allowance race last time out and seemed ready to finally show what he’s capable of.

On Saturday, his performance was brilliant as he didn’t give his rivals a chance, and we’re curious about what else he can do this season.

March To The Arch snatched up second place in the final stride as he finished on the fence, bettering third Silent Poet just by a nose. Chewing Gum (8-1) had to settle for fourth place in front of the second chance of the race, Shirl’s Speight (19-10).

The G2 turf race, offering the purse of $200,000, resulted in an absolute triumph for trainer Philip D’Amato whose trio of trainees finished in the first three places.

Covering the distance of a mile, Bellabel (4-1) started off as a favorite and settled in the midfield, upon which Umberto Rispoli successfully urged her to go forward at the fence.

Once the field of three-year-old and older fillies and mares reached the closing stages, Bellabel took command and cruised towards a smooth victory in 1:35.32, leading home her stable-mates Sixteen Arches (20-1) and Island of Love (5-1).

Umberto Rispoli prepared basically a perfect ride for his mount as Bellabel rested throughout the race, and as soon as a gap opened, the three-year-old daughter of Belardo squeezed in to achieve her premiere Graded win.

The Irish-bred filly bagged Listed race last time out, and therefore, carried a bigger weight than some of her opponents, including second Sixteen Arches, who bettered more carrying Island of Love by a neck.

All three mentioned contestants are trained by Philip D’Amato and were shipped to the US from Ireland. Still, quite green but smart Lady T (21-10), training with John Shirreffs, had to settle for a fourth place here.