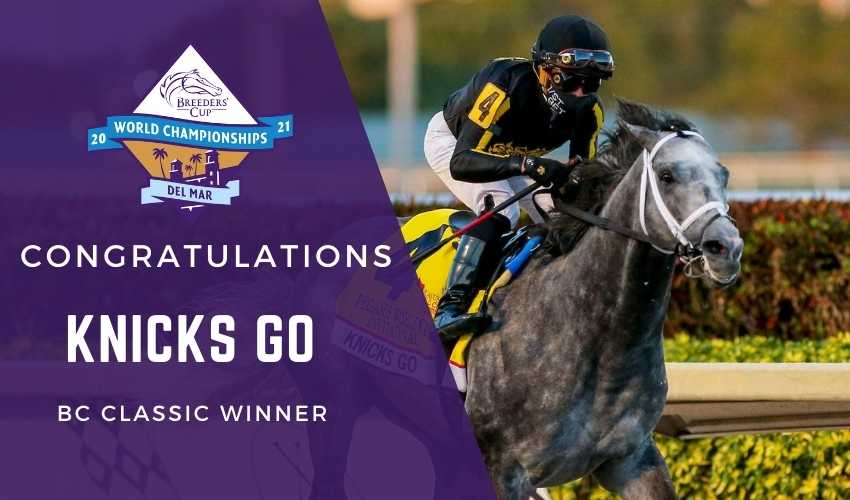 Catch him if you can. They couldn’t. Knicks Go won the Breeders’ Cup Classic with an immense display of front-running, leading at every call and drawing off in magnificent fashion through the stretch to win the richest race of the year and clinch Horse of the Year honours.

Everyone knew what Knicks Go would do, and they couldn’t stop him. The big query beforehand was the Classic distance, a furlong further than the grey five-year-old had ever gone before, but Knicks Go stretched out as though he’d been waiting for ten furlongs all his life. Jockey Joel Rosario didn’t even need to ask him any tricky questions, because Knicks Go had all the answers anyway.

In a race reduced to eight by the late scratch of Express Train, the Brad Cox-trained 3-1 shot led through the clubhouse turn with Art Collector and Medina Spirit at his heels, but Rosario let him open up down the back stretch, getting the easy lead that has always proved key to Knicks Go’s fortunes. When his pursuers were asked for an effort, Rosario still sat chilly, and when he said ‘go Knicks Go’, he went.

The race was over in a few strides. Medina Spirit kept on strongly down the centre of the track to be runner-up, thus avoiding the difficult conversations that would have arisen had the controversial Bob Baffert found his way to the winner’s circle. The 9-5 favourite Essential Quality, a stablemate of Knicks Go at Cox’s barn, plugged on for third, although he never looked really at ease at any stage of the race, and Hot Rod Charlie dropped from second to fourth in the last few strides. The time was a speedy 1:59 and one-half.

Last year Knicks Go won the Breeders’ Cup Dirt Mile, and this season had gone four-for-six, winning the Pegasus World Cup and the Whitney before his triumphant progress to glory in the Classic. A stud career beckons now, but only after leaving some magical memories of a marvellous season.