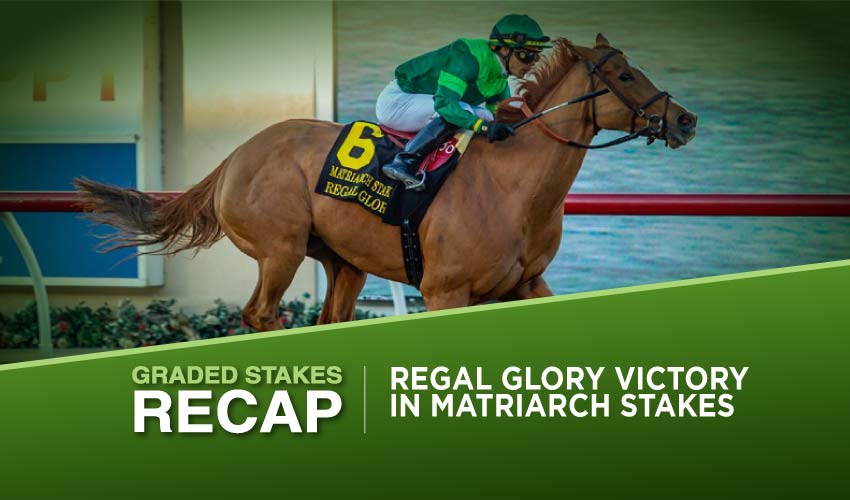 On Sunday, Del Mar Racecourse offered at least two interesting races, while G1 Matriarch Stakes was the pinnacle of the card, given it featured not only some classy mares and fillies, but the field was also hugely competitive. In the end, Regal Glory made all and didn’t allow preferred Princess Grace to get back to winning way as she had to settle for third place, while trainer Chad Brown celebrated a victory also in the Cecil B DeMille thanks to two-year-old colt Verbal.

Three-year-old and older fillies and mares clashed in this G1 turf event with the purse of $400,000, and even though the field looked strongly competitive over the distance of a mile, winning Regal Glory (8-5) didn’t allow any battle for the victory and scored easily gate to the wire. Despite the fact the five-year-old mare broke away from the outside, she was quick enough to successfully charge for the lead right away, upon which Chad Brown’s charge didn’t let anybody pass her by. After being a useful runner for the connections, Regal Glory finally seemed prime for her premiere G1 victory as she made every yard of the race.

Once she turned for home, Jose Ortiz only kept reminding her to stay focused. He didn’t have to do anything else as Regal Glory quickly drew clear from her rivals and crossed the wire with a comfortable advantage of 2 a ½ of a length in 1m 35.33s. Ensuring Grade double at Del Mar for Chad Brown on that day, Regal Glory easily held off also finishing Zofelle (74-10) in second with favourite Princess Grace (6-4) managing only third here.

The G3 turf event saw a victory of a preferred participant among two-year-old colts as Verbal (EvensF) displayed such a turn of foot in the final stretch it was enough to run down all of his rivals. After winning his debut easily, Verbal was pointed to this mile-long race with the purse of $100,000 where he faced nine rivals, and even though two of them set a fast tempo, Jose Ortiz remained calm and let his mount gallop peacefully in the midpack. As the leaders weakened, the rest of the field closed on them, upon which Verbal turned for home very wide and had some work to do in order to stay unbeaten.

However, as soon as Chad Brown’s charge unfolded his finish in the final stretch, he kept reducing the gap, and in the end, he left all of his rivals behind in time to score his first G3 victory in 1m 36.16s. The bay son of Prix de l’Arc de Triomphe runner-up Flintshire crossed the line with the advantage of a half of a length over outsider Barbados (50-1), who fought heartily alongside third Cabo Spirit (4-5).

Fourth Lottery Pick (116-10) and fifth Optimising (23-10) showed a finish in the final stretch; however, they couldn’t basically hold a candle to the more successful trio, yet it might be worth keeping them in mind regarding their future starts.

Follow us on Social Media for instant Matriarch Stakes updates!