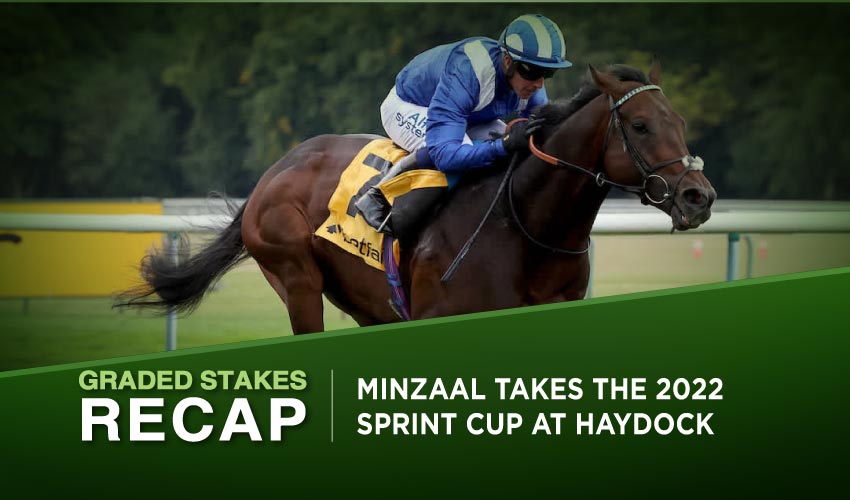 The headline race of the day this past Saturday at Haydock was the 2022 Sprint Cup S.  A Group 1 race, there were several interesting runners which would make the race incredibly intriguing. Earlier on in the card was the Superior Mile Stakes which was a competitive Group 3 contest. Here is everything that happened.

Due to the good to the firm ground that was declared at Haydock we were left with only twelve runners after several horses were withdrawn before the race.

Favorite for the contest was Naval Crown who was looking to win his second Group 1 of the season following success in the Platinum Jubilee Stakes at Royal Ascot.

Looking to assert his class, Naval Crown was up with the speed throughout the race and looked sure to play a part in the finish of the race.

However with just two furlongs to go, it had become apparent he had done too much too soon, and he tamely dropped out of the leading pack. Seeing that there was no chance of winning, jockey William Buick eased the favorite down and he would finish last.

In contrast to Naval Crown, Minzaal traveled into the race sweetly. Whilst Naval Crown was toiling, Minzaal was just beginning.

Raced just behind the front runners, Minzaal’s jockey Jim Crowley rode a patient ride and waited for the gaps to appear. With just over a furlong to run, space finally appeared and Crowley made his move.

With daylight ahead of him, Crowley said go, and off Minzaal flew. Eating up the ground with each and every stride, it wasn’t long before Minzaal hit the front. Once he got there he wouldn’t let the lead go and he powered up to the line. He would go onto win by four lengths, it was a stunning performance.

Due to concerns with the ground, only four horses lined up for this year’s Superior Mile. Leading the betting was the Kevin Ryan trained Triple Time. In our preview of this race, we flagged that he would be the unknown quantity of the race.

Triple Time headed into this race having had ten months off the track and this was his first race of the season. However, three of his four career starts had come at Haydock and two of these were wins.

With just four runners, it was Marie’s Diamond who took up the early running and would hold a narrow lead until the two furlong pole.

From here Perotto would take over and he tried to catch his rivals unaware and push for home. Andrea Atzeni on board Triple Time binded his time and was more than content to keep tracking the leaders.

Traveling smoothly, Atzeni gently nudged away on Triple Time and by the time the horses had hit the furlong pole, it was Triple Time who had gained the lead.

Moving into the final furlong and Perotto’s race was run, but the eye was drawn to the back of the pack where Tacarib Bay was finishing with a flourish.

Despite Tacarib Bay’s best efforts, the gap was just too big to claw back and despite closing the gap to just over a length, Triple Time always looked secure and wrapped up the win in a comfortable fashion.

With this being his only run of the season you have to think that it won’t be too long before we see Triple Time once again. A horse with a huge engine, it will be fascinating to see where he ends up next.