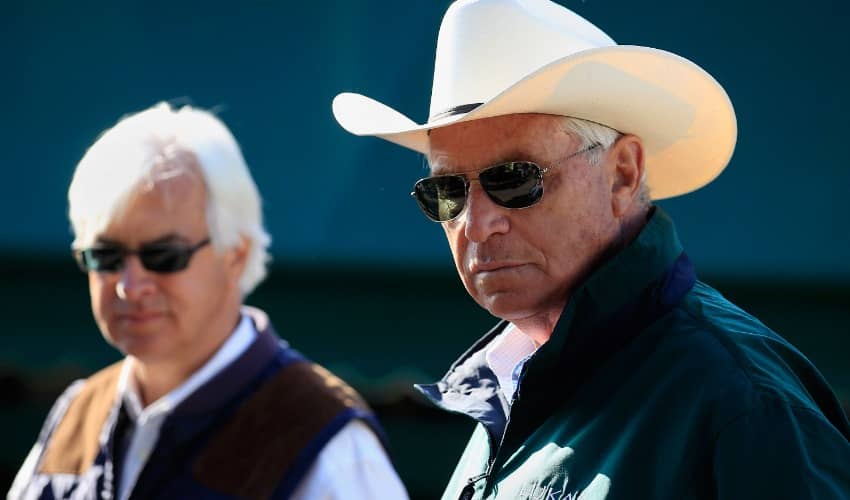 Darrell Wayne Lukas is one of the most respected horse racing trainers in the United States. To date, he has recorded over 4,800 winners and has claimed victories in 20 Breeders’ Cup races. However; Today we will go through the life and times of the famous 86-year-old. Starting with his early years as a trainer.

The octogenarian still rises at 3AM to manage his stable and 2022 has been an amazing year for the “coach”.  He is nicknamed the coach not only because he use to coach basketball but also because of the eleven proteges now running their own training operations including Hall of Famer Todd Pletcher.  Lucas has two three year olds that have already played a part in both the Kentucky Oaks and Derby this year.  Secret Oath took on the boys in the 2022 Arkansas Derby and finished third.

She then passed on a shot to run in the Kentucky Derby and was entered in the Oaks where she went off at 4/1 and handily romped home a two length winner.  That same morning Ethereal Road was scratched by Lucas from the Derby and that allowed a relative unknown horse by the name of Rich Strike to make the field.  The next day Rich Strike came home at 80/1 to win the 148th Kentucky Derby prompting Lucas to joke “I want my 10%”

Darrell Wayne Lukas’s first steps into the world of horse racing came at a very early age; as he grew up around horses in his hometown of Antigo, Wisconsin. His early years were spent on a farm before he went to the University of Wisconsin-Madison; where he graduated before becoming a basketball coach. However, it wasn’t long after that when he delved back into racing.

He started to train quarter horses back in 1968, which he continued to do in California with major success for ten years. Before switching to training thoroughbreds, he had trained 24 world champions. His big break in thoroughbred racing came in 1980, as he trained the winner of the Preakness Stakes, as Codex claimed a famous win in the Triple Crown race.

That success with Codex was the first major win of Darrell Wayne Lukas career, but more success soon followed. The Triple Crown races saw him achieve major successes on almost a yearly basis. After his success in the 1980 Preakness Stakes, he would add further success in 1985 with Tank’s Prospect, before winning in back-to-back years with Tabasco Cat and Timber Country in 1994 and 1995, respectively. Lukas would train the winner of the Preakness again in 1999 with Charismatic, while Oxbow in 2013 was his most recent winner.

The Triple Crown series in 1995 would be a landmark year for Darrell Wayne Lukas, as he became the first trainer to win all three races with different horses. Thunder Gulch won the Kentucky Derby and Belmont Stakes, while Timber Country won the Preakness Stakes. His four wins in the Kentucky Derby have come in 1988, 1995, 1996, and 1999. He has also recorded four wins in the Belmont Stakes. His first win came with Tabasco Cat in 1994, before he went on to win the following two renewals with Thunder Gulch and Editor’s Note. His most recent win in the race came in 2000 with Commendable.

Darrell Wayne Lukas has won a number of individual accolades throughout his esteemed career. He became the first-ever trainer to break the $100 million barrier in winnings; while he has also led trainers in terms of prize money won on 14 occasions. He has picked up the Eclipse Award for Outstanding Trainer on four occasions. Lukas won the award in consecutive years between 1985 and 1987 before his most recent win came in 1994.

He was also the leading American trainer in terms of wins in each year between 1987 and 1990. His legacy in the sport was honored in 2013, as he was awarded the Eclipse Award of Merit. However, he admitted during his acceptance speech that he had no plans to slow down.

Follow us on Social Media for instant Hall Of Fame updates!