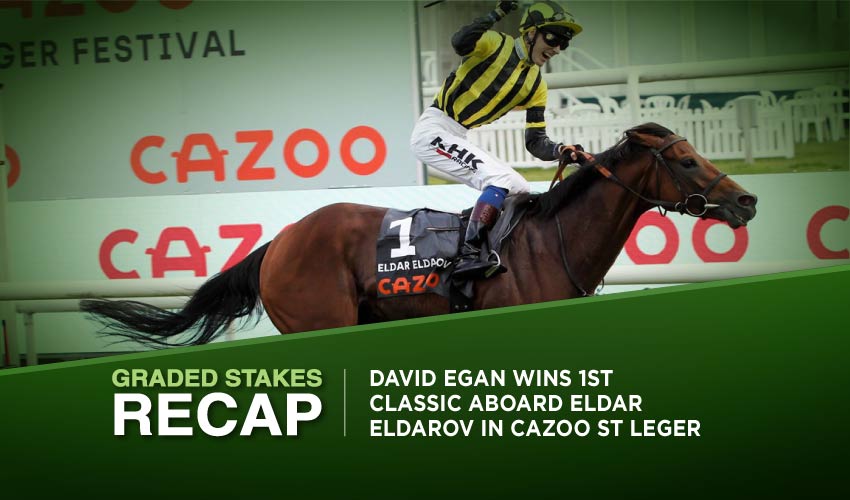 Due to tragic circumstances with the passing of Queen Elizabeth II, this year’s St Leger was moved from its usual Saturday slot and pushed into Sunday. Headlining a nine-race bumper card, the Cazoo St Leger was the main event, and all eyes were on who would finish the season by bagging the last British Classic. As well as the St Leger there were two other fantastic races in the form of the Champagne Stakes and Park Stakes.

Here is everything that happened.

All eyes were on the Charlie Appleby trained New London as the Godolphin stable looked to win the race for the second consecutive year. Making the step up in trip and class, many believed that he could take the jump in class in his stride whereas other believed he could be taken on.

We were one of those who believed that New London had a lot to prove, and we instead sided with Eldar Eldarov, who was proven in both the grade and at the distance.

New London looked to always stay close to the leaders but looked in trouble from two furlongs out. With New London paddling, the eye was drawn to the outside and the yellow and black colours of Eldar Eldarov, denied clear racing room at the two-furlong pole, jockey David Egan remained calm and waited for the seams to appear. Finally, they did, and when they did Eldar Eldarov was still full of running.

Edging his way to the front, Eldar Eldarov turned the race into a procession and strode clear inside the final 100 yards. It was Egan’s first Classic. A highly touted rider, it wouldn’t be a surprise to anyone to see him win plenty more.

Haskoy finished second but was relegated to fourth after it was deemed, he caused significant interference as the chasing pack ran inside the final furlong.

The first graded race of the day came in the form of the Champagne Stakes, a race for two-year-olds, it was a poor turnout with just three horses cantering down to post.

The favorite was Silver Knott who was looking to build on a previous Group 3 victory.

Chaldean, another previous Group 3 winner was believed to be Silver Knott’s main threat and as soon as the starting stalls opened, the Andrew Balding runner flew out of the gates. Looking to dictate the fractions, Chaldean quickly established an uncontested lead. Silver Knott was happy to look on from the back of the pack and as the horses crossed the two-furlong pole, looked to make his move.

With all eyes on the back of the field, Chaldean drew away. Whilst we were waiting for the challenge from Silver Knott, the move never came. Clearly unsuited by the soft ground, Silver Knott just couldn’t find the pace to match the combination of Chaldean and Indestructible. Chaldean was in a class of his own and as soon as Silver Knott’s challenge faded, he was always going to be the likely winner.

The warmup to this year’s St Leger was the Cazoo Park Stakes. Raced over seven furlongs, it was Kinross who was expected to be the horse to beat, and he didn’t disappoint.

The race was run at a cracking pace with the game front runner Al Suhail looking to lead off the front. His speed blunted the challenge of some of the six-runner fields with only a few horses able to keep up.

Always traveling strongly, Kinross never looked in trouble, and with just a furlong and a half to run, Frankie Dettori swept to the front and never looked back. Showing that he was in a class of his own, as soon as he hit the front he was gone, and the race was over.

New Energy ran a cracker to finish second and despite struggling to match the class of the leaders, credit must be given to Al Suhail who hung on for third.