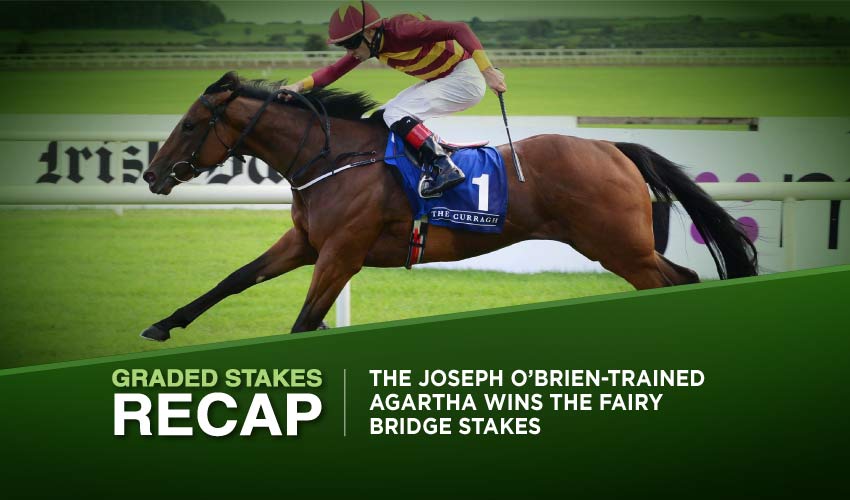 This past Friday and Saturday saw some fantastic racing across the Curragh and Tipperary. Four races headlined the two days and these were the Fairy Bridge Stakes, Tower Stakes, Irish EBF Stakes, and Snow Fairy Stakes. Here we recap the best of the action.

Looking to cement her class over the rest of the field it was Agartha who was the quickest away from the starting stalls and quickly established an early lead.

With the two surging clear of the rest, it looked like the race was Night of Romance’s to be won. Joining the long-time leader, he looked to make his charge, but Declan McDonagh asked Agartha for more and she duly responded.

Showcasing all of her class, she dug deep and kept up the relentless gallop. With the pace too hot to handle, Night of Romance couldn’t get past having to settle for a defeat by a length.

The two were lengths clear of third place Spring Feeling.

Kicking off Saturday’s racing action was the Tower Stakes, a Group 3 race open to two-year-old horses there were plenty of interesting horses who cantered down to post.

Favorite for the race was the Paddy Twomey-trained Treasure Trove who was looking to back up his promising displays in Listed company and land his first graded success.

A speedball of a horse, Treasure Trove was looking to make the step up to 6 furlongs, following success over five furlongs. To compensate for the extra distance he was given a very patient ride.

Content to sit at the back of the field, he traveled smoothly into the race. His jockey Billy Lee sat as cool as a cucumber until well inside the final furlong.

With a lot of horses still underneath him, he pressed the go button, and off Treasure Trove flew.

Eating up the ground, he quickly found himself amongst the leaders with just 100 yards to go. Looking to cause the shock was Coralillo, who at a huge price was looking to spring a major surprise.

Having to push Treasure Trove out, he snuck past the game Coralillo and lunged for the line just ahead of the fast-finishing Ocean Quest.

It was a superbly timed ride and despite the margin of victory only being a head, the victory was cozy enough to suggest exciting things might be on the horizon for this two-year-old who is clearly going places.

With the action continuing to come thick and fast, all eyes were focused on this year’s running of the Irish EBF Stakes. Open to two-year-old fillies, eight horses lined up for their shot of glory.

Leading the betting was the Paddy Twomey-trained Shelton. With his stability in fine form, he looked a good option in a competitive field.

With many horses looking to grab the initiative it was the exciting prospect, Caroline Street who dictated the early fractions. The order of the horses would largely remain unchanged until the horses hit the furlong pole.

Looking to complete an all-the-way win, Caroline Street tried to streak clear but her jockey Shane Crosse quickly discovered his mount had run out of gas and tamely dropped back through the field.

With Caroline Street dropping out of the race, the race was incredibly wide open.

Shelton tried to grab the initiative and burst through the middle of the pack and looked like the one they all had to beat. However, despite leading she wasn’t stretching away from the field and Shelton’s jockey Billy Lee was having to work incredibly hard to maintain the lead.

Always vulnerable to a better running horse, the eye was quickly drawn to the outside where the outsider of the field Aspen Grove looked to be traveling smoothly. Looking full of running, she swept her way to the front with just a hundred yards to go and won going away.

Shelton would cling on for second, just pipping Eternal Silence who would have to settle for third.

The final race of the day was the Snow Fairy Fillies Stakes were six horses looked to add their names to the list of prestigious winners.

Leading the betting was the Ger Lyons-trained Juncture who was looking to build on her second-place finish in the Grade 3 Desmond Stakes.

Covering the move and bursting out of the pack was Viareggio. Quickly matching the long-time leader’s stride, it was Viareggio who quickly sauntered to the front.

The main danger looked to be Juncture, who plotting a wide course seemed to be staying on for pressure. However, she always looked short of pace and couldn’t do enough to seriously threaten the leaders.

Despite her large price, Viareggio easily traveled like the best horse in the race and it will be very intriguing to see where she races next.