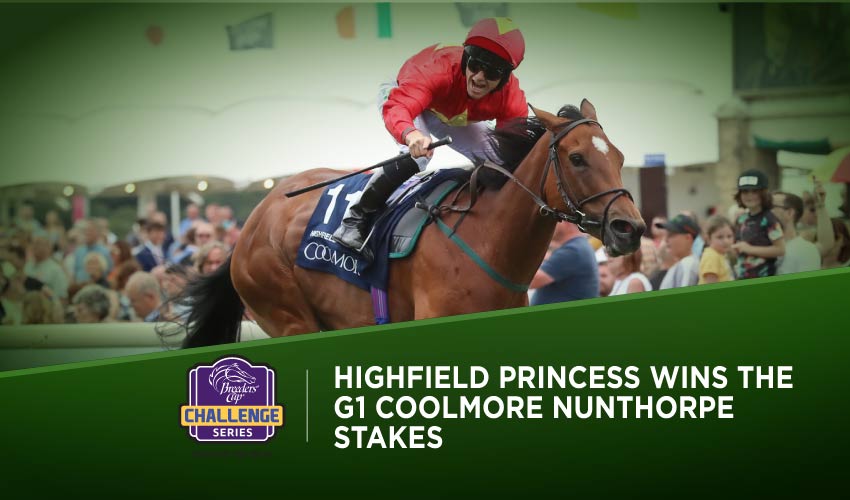 One of the most exciting race days of the year is now in the books following the conclusion of Friday’s racing at this year’s York Ebor Festival. With three top quality races dominating the card, we recap all of the action from the Group 1 Coolmore Nunthorpe Stakes, Group 2 Lonsdale Cup and Group 2 Gimcrack Stakes.

The headline race of the day was the Nunthorpe, which is one of the most sought after prizes for horses within the sprinting division.

As competitive as ever, thirteen horses lined up for this year’s renewal with all eyes on the James Tate trained Royal Aclaim who headed into the race unbeaten.

Expecting to cement his class, it was a rough race for Royal Aclaim who despite shaping well, didn’t have the speed to challenge in the final furlong and could only finish in a disappointing 6th place.

Instead this race completed somewhat of a fairy tale for trainer John Quinn who trained the winning horse, Highfield Princess. Based in Yorkshire, the Ebor Festival is very much his home festival and the locals left the course happy that one of their own had managed to bag such a prestigious prize.

A five year old, the training job that Quinn has done has been sensational as this was certainly not the plan when Highfield Princess was originally purchased. A winner of bottom tier races just a few years ago, yesterday’s win was her second successive Group 1 success and there would have been no more popular winner throughout the week.

Charlie Appleby could finally lift the lid on what has been a frustrating week for him and his yard after his two year old star Noble Style emerged victorious in this year’s Gimcrack Stakes.

A Grade 2 contest, the Gimcrack is one of the most competitive two year old races in Europe. The winners of this race are usually set for a hugely exciting future.

With twelve horses trotting down to post, it was Karl Burke’s Marshman who ended up as the narrow favourite. Unbeaten in his two previous races, the hope was that Marshman could take the step up from novice company in his stride, and his backers were so nearly proved right.

Looking to assert his class and authority, jockey Clifford Lee pushed the go button two furlongs from home and Marshman quickly drew away from the rest of the field.

Looking to maintain his own unbeaten record, Noble Style quickly set off in pursuit, and after showing an efficient change of gear, Noble Style picked up his rival with a furlong to race.

With the two set for a battle, both veered of their natural racing lines with Marshman leaning left and Noble Style edging right.

With both horses at full pelt inside the final furlong it was Noble Style who finally got past and motored towards the line.

However, the drama wasn’t over, under pressure, Noble Style kept hanging to the right opening the door for Marshman to barge his way through it. With the race still in the balance, Noble Styles jockey William Buick just about straightened his mount and crossed the line in first place.

The two were streets clear of the rest of the field, confirming their dominance as the best two horses in the race. Credit must be given to Cold Case, who although he finished several lengths behind the top two, was still comfortably clear in third.

Racegoers at York headed to the course on Friday excited by the prospect of seeing two greats renew their rivalry once again. In a race that was billed as Trueshan vs Stradivarius, the racing public would be left disappointed as both horses were withdrawn before the race.

Stradivarius was the first to be omitted, unable to run following a bruise to his foot. Trueshan’s withdrawal came just an hour before the off, with trainer Alan King taking the hard decision to withdraw his horse due to ground concerns.

With the top two out of the race, this just left six horses left and all of a sudden the race became wide open.

Instilled as the new favourite, Coltrane who had finished fourth behind both Stradivarius and Trueshan in the Lennox Stakes was everyone’s fancy. But there would be dangers throughout the field, most notably in the form of Quickthorn, who was looking to backup his victory in a French Grade 2 contest last time out.

Despite the drama before the race, the race itself was emphatic.

Jumping from the gate and clearly happy to lead, Quickthorn soon got himself into a beautiful rhythm. Expecting the pace to slacken, Quickthorn’s jockey Tom Marquand had other ideas and at the three furlong pole let his mount go.

Surprising the field with his burst of speed, Quickthorn soon established a huge lead.

With his rivals unable to match both his speed and stamina, the only question left remaining was how far Quickthorn would win by.

Able to ease his horse down, Tom Marquand was able to win by cantering his charge over the line.

The real race was on for second, third and fourth with Coltrane and Reshoun narrowly filling those positions. Tashkhan was the unlucky horse to finish outside of the places in fourth.