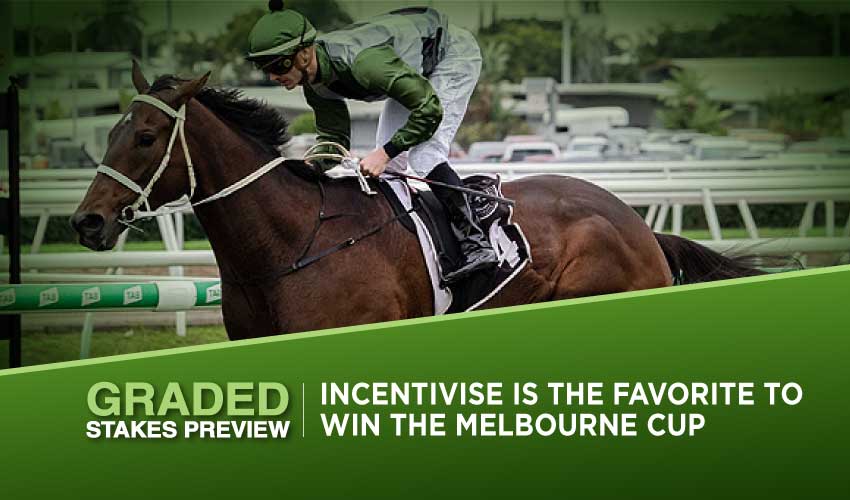 In November, the first Tuesday is the day for the world’s richest world turf handicap, the 2 miles-long Melbourne Cup run at the Flemington Racecourse, Australia. A large field of 24 horses comprise last year’s winner Twilight Payment, another European raider Spanish Mission, and two Australian stars – Incentivise and Veerry Elleegant. So, let’s get into our Melbourne Cup Odds, Pick, and Preview.

On Tuesday, 24 three-year-old and older horses will clash at the distance of two miles on the turf surface, and as the G1 race with a purse of A$8,000,000 is a handicap, the field is expected to be pretty competitive.

However, this year’s Melbourne Cup looks to have a strong favorite which is definitely the one to beat here despite carrying one of the enormous weights – Incentivise (5-4). The five-year-old gelding trained by Peter Moody has been unbeaten in nine starts, including his last three brilliant performances at the G1 level. Gradually, he won the Makybe Diva Stakes over a mile, then the Turnbull Stakes over a mile and a quarter, and scored an impressive victory in the Caulfield Cup over a mile and a half. Incentivise had to cope with a wide gate, and therefore, he was giving some lengths away in both turns; still, the gelding found no serious rival back then. He just bolted forward unchallenged in the final stretch, so if he shows something similar on Tuesday, he should complete the Caulfield – Melbourne Cups double.

Moreover, Australia has another star in the field as Veerry Elleegant (12-1) had a good piece of work in the past few days, so her trainer Chris Waller decided to send her to the Melbourne Cup once again. The six-year-old mare has been fantastic for her connections, bagging G1 victories over various distances, including three G1 races in 2021. Last year’s Melbourne Cup meant seventh place for her. Because her previous two performances were slightly below par, and she’s about to carry one of the biggest weights on Tuesday, Veerry Elleegant is again expected to run a solid race, but not to actually fight for the victory.

Other ones to look for the Horse racing entries

The Geelong winner Tralee Rose (15-1) and the Bart Cummings winner Grand Promenade (12-1) are also in the mix. They have proved to handle long distances and possess a particular hint of class. Floating Artist (20-1) and Great House (50-1) could be the ones causing upset here as they don’t belong among the favorites, but they’re carrying the smallest weights here; which is usually a factor in the Melbourne Cup as well the age. Therefore, three-year-old Sir Lucan (15-1), an ex-Aidan O’Brien trained bay, wouldn’t shock anybody when pulling off an impactful finish in the final stretch. Five-year-old Persan (18-1) finished fifth in last year’s edition, also beaten by the New Zealander The Chosen One (30-1).

Despite the fact, the new Australian procedures, especially the scans without which the horse cannot be cleared to run in the race, put off some European trainers, Joseph O’Brien opted for the trip with eight-year-old Twilight Payment (8-1) to have a go at winning the Melbourne Cup for the second time in a row. The gelding is in fine form, so he could place, which also applies to Spanish Mission (11-2), an Andrew Balding bound five-year-old, who’s a very classy stayer, yet has no experience with such large fields of participants. Both of them belong among participants carrying the biggest weights here.

Our Betting Prediction for the Melbourne Cup

Our pick for the Melbourne Cup is INCENTIVISE as it’s tough to see past him and his smooth victory in the G1 Caulfield Cup.