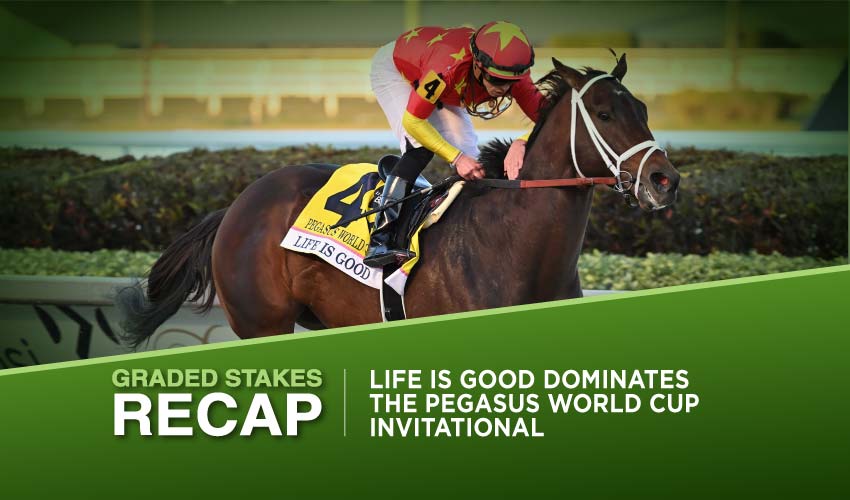 It wasn’t quite what we expected, but the Grade 1 Pegasus World Cup Invitational at Gulfstream Park on Saturday drew an outstanding performance from the magnificent c, who blazed a trail no-one could follow on his way to a dominant victory over last year’s Breeders’ Cup Classic winner Knicks Go.

As the old song goes, you can’t always get what you want. The Pegasus World Cup at Gulfstream Park on Saturday was expected to be a duel, a battle, a one-on-one to remember. It wasn’t. Yet the old song also tells us that sometimes, you get what you need. American racing needed a new champion, and boy, has it found one. No-one who saw Life Is Good tear up the track in mesmerizing fashion could have been disappointed that he won without a fight.

It was a demolition job. The big question was which of the two superstars would lead, whether Life Is Good or Knicks Go, because the lead was the key to the race. So when Life Is Good was first to the clubhouse turn, and the slightly lethargic Knicks Go only third, that was the ballgame. There would be no duel. Instead, Life Is Good was utterly dominant on the lead, controlling the race without the need to throw in a blitzing quarter, so superior to his rivals that jockey Irad Ortiz could spare the time to pull down his goggles in mid-stretch, the job done, the race won, the new champion anointed.

“I can’t think of a horse I’ve trained that’s been better than him,” said trainer Todd Pletcher, who has had several champions, won two Kentucky Derbys and also a big handful of Breeders’ Cup races. “He’s extra special. He has that ability to go fast and just keep going. He’s fun to watch.”

On his first run at a mile-eighth, the 4-5 favourite Life Is Good covered the distance in a tick under 1:49, and won unchallenged by three and a quarter lengths from Knicks Go, who never had the kick to get into the race. The gallant grey wasn’t at his best, shown by the fact that Stilleto Boy was only a length behind him in third, and he had stood still for several minutes before the start while the others kept limber by walking in circles. When Joel Rosario took back on the clubhouse turn, it was an admission of defeat.

“I wanted to go with Plan A and be on the lead, but we didn’t execute Plan A,” said trainer Brad Cox. “He did a good job, but it wasn’t good enough. The winner was very, very good.”

Now Knicks Go retires, with his position as 2021 Horse of the Year surely soon to be confirmed. Life Is Good, his record now six-for-seven, his reputation sky-high, will go on to further glories, with the $12 million Group 1 Dubai World Cup on March 26 – over a mile and a quarter – a possible next pitstop on the road to greatness.

“He’s unreal,” said Ortiz. “He’s the best horse I’ve ever sat on.” One World Cup in the bag for Life Is Good, another within grasp. The four-year-old son of Into Mischief really does have the world at his feet.

Colonel back in command

It was certainly an afternoon to remember for trainer Todd Pletcher, who took home both the day’s seven-figure purses after – three-quarters of an hour before Life Is Good’s romp – Colonel Liam retained his crown in the Pegasus World Cup Turf on his return following a long layoff.

The outcome was a tribute to Pletcher’s training ability. Not only did he produce 8-5 favourite Colonel Liam in perfect shape on his first start since early June, but he also pulled down the exacta with Never Surprised – just as he had done 12 months ago when Colonel Liam beat Largent.

It was Never Surprised who laid down the fractions, getting over quickly from his outside post, before Colonel Liam moved up menacingly around the turn to join battle with his barnmate at the top of the stretch. The reigning champ was in front at the eighth pole and kept on willingly under Irad Ortiz to score by a length, stopping the clock in 1:47 and one-half. Never Surprised held on to second spot by half a length from the rallying Space Traveller.

“We needed everything to go exactly according to schedule,” said Pletcher of the difficulty of bringing back his sidelined star. “We didn’t have time for a prep race. It was a matter of whether we could have him ready to run off the layoff, and thankfully we did.”

Colonel Liam, a five-year-old son of Liam’s Map, took his record to seven-for-ten with this success, his third at Grade 1 level. His next target has yet to be determined, although Pletcher may consider running him on dirt later in the year.

The inaugural running of the Pegasus World Cup Filly & Mare Turf was won in authoritative style by the 4-5 favourite Regal Glory, who overcame her unaccustomed position at the back of the pack in the early stages to win going away in style, giving trainer Chad Brown yet another big turf prize.

The six-year-old mare, winner of the Grade 1 Matriarch on her previous start, is habitually somewhere near the pace, but she missed the kick and jockey Jose Ortiz had to reach for Plan B, his mount travelling down the backstretch with only two horses behind her. Regal Glory came running, though, moving up on the far turn and going six wide into the stretch before swooping down upon front-runners Alms and Shifty She, swiftly taking an advantage she extended to two and a half lengths at the wire. The longshot Alms outfought Shifty She to secure second place by a neck.

“They went fast early on,” said Ortiz. “About the three-eighths pole, I was sitting on a lot of horse. You could see she was ready, and I just passed them all. She was the best in the race.” The daughter of Animal Kingdom has now won ten of her 17 races, but this could be the last as Regal Glory is booked to visit Into Mischief and begin a new career as a broodmare, although after this performance there may be a change of heart. If not, what a way to leave the stage.

Make sure to stay tuned for the latest racing odds, Horse racing entries and Races results. Sign up and get a 10% rebate.