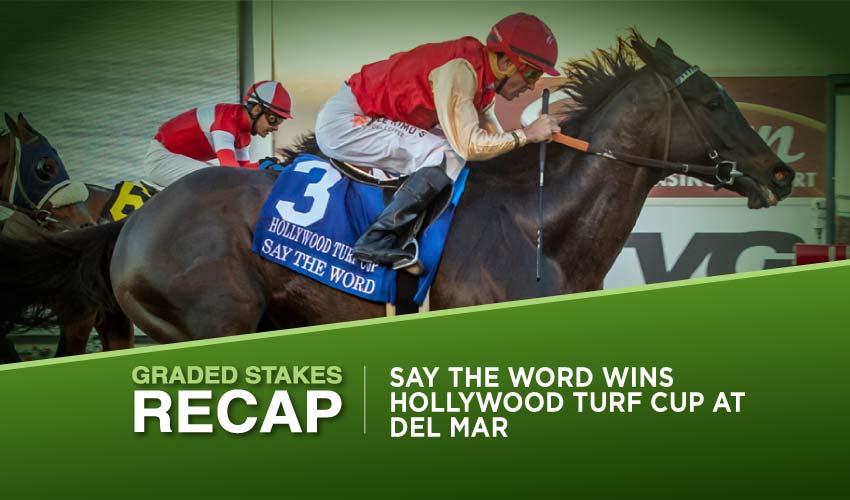 The cards of previous days provided by the Del Mar Racecourse offered two Grade races, while neither of them saw a triumph of the preferred contestants. On the turf surface, Neige Blache used the lack of pace to the fullest and scored the G3 Red Carpet Handicap on Friday, and on Saturday, Say The Word rallied from last to first in the Hollywood Turf Cup Stakes as favourite Rockemperor didn’t fire at all.

The G2 turf race held at the distance of a mile and a half didn’t see a victory of the favourite as Say The Word (11-2) trained by Philip d’Amato earned most of the purse of $250,000. The six-year-old gelding didn’t show anything interesting in his two most recent outings, but this time, the turf surface at Del Mar, suited him remarkably as he unfolded such a finish in the final stretch that none of his six rivals could react to it. Kent Desormeaux had the bay settle at the rear of the field, and he didn’t rush anywhere in the final turn, relying on the fact Say The Word still looked full of energy and ready to rally forward, which he did, indeed.

Although he turned for home quite wide, he soon enough found a comfortable rhythm, closed on the main pack, and in a span of a few seconds, Say The Word sprinted past by the leading pair Acclimate (99-10) – Friar’s Road (3-1) and recorded his second American G2 victory in 2m 27.62s. Front-running Acclimate delivered another fine effort when crossing the wire in second, a length behind the winner, with Friar’s Road, also running decently, snatched third place.

Outsider Award Winner (207-10) was fourth, while preferred Rockemperor (4-5) didn’t make up for the below-par performance at the Breeders’ Cup meeting and had basically nothing to offer in the final stretch. Still, he might’ve been just tired from the demanding campaign as it was his eighth start since May; moreover, Saturday’s race could’ve just happened too soon after the Breeders’ Cup. Say The Word deserves respect, nevertheless, as he managed to return to the form he used to display also in his homeland, Canada.

The purse of $100,000 attracted a field of five three-year-old and older fillies and mares who clashed at the distance of a mile and 3 furlongs; however, preferred filly Luck (30-100) had no luck in this G3 turf handicap. Despising the slow pace, she still managed to settle in fourth but couldn’t possibly show off her lethal turn of foot in the final stretch as front-running Neige Blanche managed to hold her off.

Juan J Hernandez achieved a G3 victory aboard Neige Blanche in May, but last time out, she lost significantly to Luck, and the four-year-old filly wasn’t expected to turn the tables on her. However, she set a false pace from the start, and despite the fact Nicest (13-2) headed her when turning for home, Neige Blanche, trained by Leonard Powell, had something left in the tank, returned to the front, and crossed the line in 2m 15.45s, ahead of late finishing Luck.

Nicest was third, but all participants went past the wire in a margin smaller than two lengths as England’s Rose (42-10) was fourth and Single Soul (176-10) fifth.