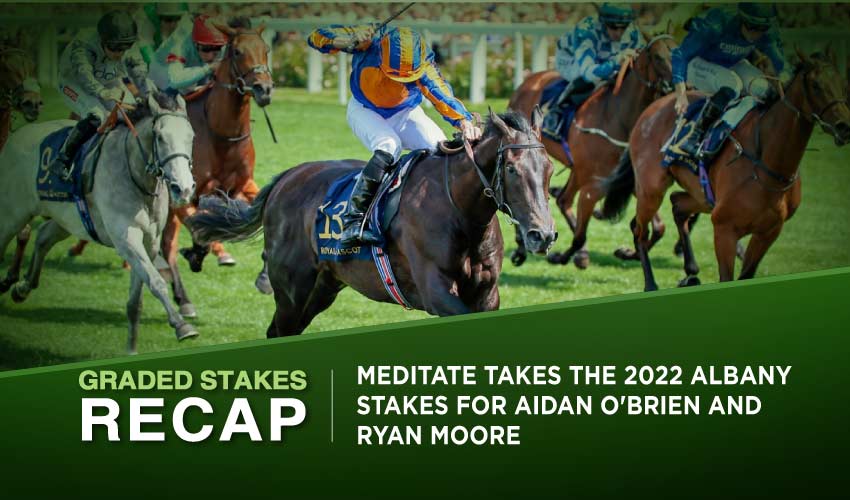 Like in the G1s held on Friday; also other Graded races favored the preferred participants; moreover, both trained by Aidan O’Brien. In the G3 Albany Stakes, Meditate reigned over two-year-old fillies over the distance of six furlongs, upon which Changingoftheguard made all to score the G2 King Edward II Stakes. However, he did so only by a short head after Grand Alliance threatened his success seriously.

The G3 race was open to two-year-old fillies who covered the distance of six furlongs. In this turf event, with the purse of £100,000 up for grabs, Meditate (5-2) was prominent since the beginning, and under Ryan Moore, she completed a victorious hattrick. Nobody really challenged the Aidan O’Brien bound filly; therefore, Meditate triumphed in 1m 14.38s with the advantage of one and ¾ of a length over second Mawj (2-1). Ivory Madonna (66-1) was third.

After Meditate scored her debut in April by more than three lengths, she managed to step up her game in a G3 company in May. Back then, she prevailed smoothly, and something similar happened on Friday as she was already going strongly. The daughter of No Nay Never achieved her second G3 victory and definitely looks like a G1 prospect for the Aidan O’Brien team.

Mawj also galloped close to the front, but once Meditate took over, she was basically sentenced to second place. Ivory Madonna denied the odds by far as her third place, after hanging left in the closing stages, was very promising. Queen Olly (8-1) took fourth place in front of fifth Sydneyarms Chelsea (25-1).

Like in the previous event, also this G2 turf race for three-year-olds witnessed a front-running victory. The purse of £250,000 attracted a field of six participants who clashed at the distance of a mile and a half. Changingoftheguard (11-10) maintained the role of a favorite here despite going to the start so early after finishing fifth in the Epsom Derby, but he narrowly managed to justify the decision to send him here.

Under Ryan Moore, Changingoftheguard was eager to take command, stayed first until the final stretch, and just did enough to score the race by a short head in front of Grand Alliance (10-1). The Aidan O’Brien bound bay crossed the wire in 2m 30.44s. Behind the mentioned duo, Lysander (15-2) recorded a distant third place.

Changingoftheguard broke his maiden in his seasonal debut, where he showed lots of ability when destroying the field by six lengths. Subsequently, he also easily delivered in the Chester Vase Stakes – the Epsom Derby trial, and in the Classic race itself, he made a bold effort.

It is difficult to score such a race from the front, and even though he finished only fifth, it was something expected of him, and on Friday, he once again gave everything he had. This time, it was enough, even though Grand Alliance ran a great race in defeat. The rest of the field, lead home by Lysander, simply was no match for the first two at home.