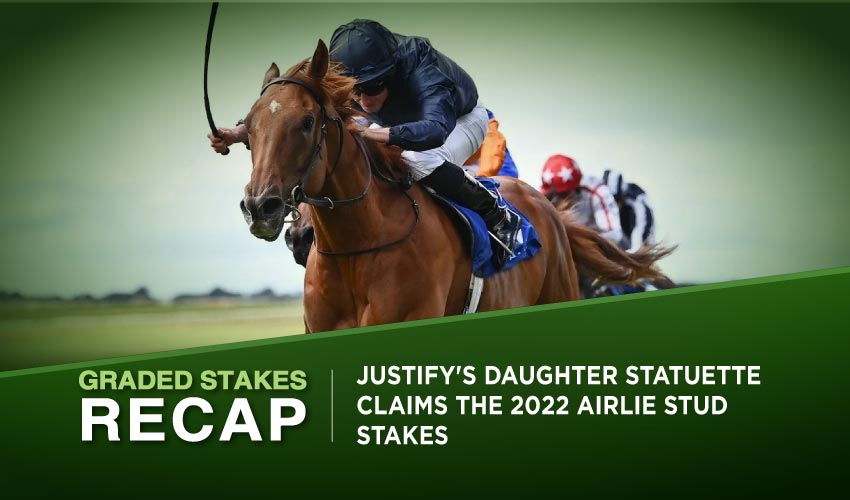 On Sunday, the festival at the Curragh Racecourse in Ireland continued with a couple of Graded races, in the G2 Airlie Stud Stakes for two-year-old fillies, Statuette kept her unbeaten record when fulfilling the role as the favorite, while in the G1 Pretty Polly Stakes the field was quite competitive, Le Petite Coco returned to the tracks with a bang and recorded her premiere victory among the elite, bettering boldly fighting My Astra by half a length.

The first of two Graded races held on Sunday was open to two-year-old fillies who vied for the purse of €120,000. On the turf surface, seven participants of this G2 event covered the distance of six furlongs, while chestnut filly Statuette (4-6) triumphed her smoothly.

Under Ryan Moore, she travelled in fourth, but as the jockey asked her to quicken up, nothing seemed easier for the smart daughter of Justify. Statuette trained by Aidan O’Brien willingly took command and delivered in 1m 13.64s, crossing the wire with the advantage of ¾ of a length over second Badb (25-1). Matilda Picotte (18-1) was third.

After bagging her debut by three lengths, Statuette was the clear leading chance of this G2 race, also due to her pedigree. Not only she’s the offspring of the American Triple Crown holder Justify, but she’s also expected to be a very smart filly thanks to her mother, Immortal Verse, whose daughter Tenebrism is a G1 victress. The future for Statuette seems to be quite bright, but second Badb ran a great race as well, while neither third Matilda Picotte nor fourth Zarinsk (5-1) were far away from the winner.

This G1 event for three-year-old and older fillies and mares attracted a field of nine contestants who clashed at the distance of a mile and a quarter. On the turf surface, Le Petite Coco (9-1) continued her progress as despite entering the season on Sunday.

She managed to score the €300,000 event by half a length. Galloping in fourth, she responded with a fine finish when Billy Lee asked her, and as soon as she hit the front, Le Petite Coco didn’t let anybody before her. She prevailed in 2m 13.86s, with My Astra (11-4) running in second in front of third Thunder Kiss (40-1).

Four-year-old Le Petite Coco climbed through the categories in the 2021 season, showing off her talent wherever she went, especially when winning the G2 Blandford Stakes. Still, her chances were perceived a bit sceptically due to the fact she was only commencing the season; moreover, it’s true her trainer isn’t very well-known, but the daughter of Ruler of the World prevailed, securing her first G1 victory both for herself and her trainer, Paddy Twomey.

His joy could’ve been even greater as his other filly, Rosscarbery (20-1), crossed the wire in third but was disqualified because the jockey weighed less than he should’ve. Therefore, as My Astra finished second, Thunder Kiss was promoted to third behind her. Recent G1 winner from France, Dreamloper (13-2), despised the going and was never a factor when running in sixth.