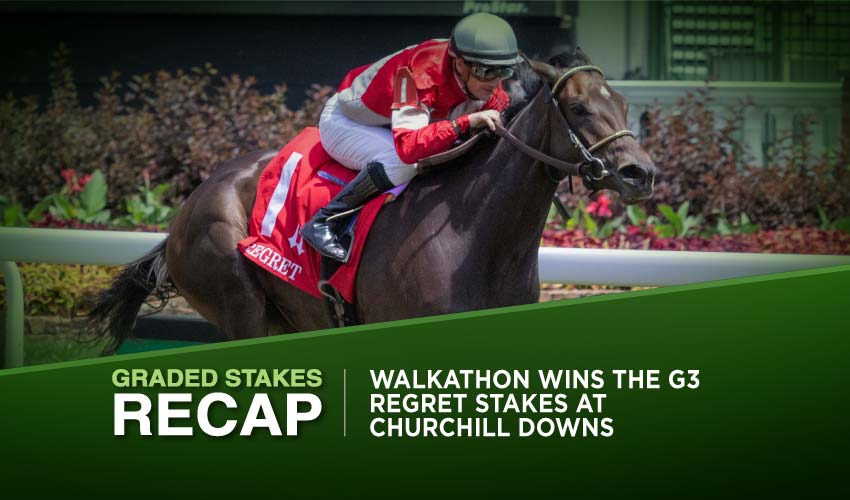 Two trainers took the plaudits at Churchill Downs on Saturday, with Ian Wilkes’s decision to switch Walkathon to turf continuing to pay dividends with her victory in the G3 Regret Stakes. Later, Brian Lynch brought back Admission Office from 15 months on the sidelines to steal the G3 Arlington Stakes in the final stride.

Walkathon picks up the pace

The switch to turf has been the making of Walkathon, who stretched her unbeaten streak on the weeds to three on her stakes debut in the Regret, the feature at Churchill Downs on Saturday.

The 5-2 second-choice permitted longshot Lola Flo to set leisurely fractions until breezing past her around the turn, swiftly opening a clear lead and putting the race to bed by mid-stretch. The odds-on favorite McKulick rallied gamely and was reducing the gap all the way to the wire, but Walkathon still had a length and a quarter to spare as the camera clicked, stopping the clock in 1:49 and one-fifth. Beside Herself was third, six and a quarter lengths further back.

“She can be a bit hyper and get worked up, but that’s just who she is,” said jockey Julien Leparoux, who was celebrating the milestone of his 1000th win at Churchill Downs. “She was full of running at the end, I couldn’t have asked for anything more. She loves this turf and has really shown that in her last few starts.”

Walkathon, whose dam is a half-sister to Breeders’ Cup Classic winner Fort Larned, was zero-for-four on dirt and synthetics but the change of focus by trainer Ian Wilkes has proved a masterstroke. The next step may be the ungraded Tepin here over a mile on July 2.

Office is back in business

Brian Lynch produced a remarkable feat of training when sending out Admission Office to win the Arlington on his first start for more than 15 months.

The seven-year-old, a 7-1 shot who had been gelded since his last appearance in February 2021, showed no sign of rustiness under John Velazquez. He trailed the field to the top of the stretch before rallying strongly to pass all his five rivals, surging in the last sixteenth to nail long-time leader Get Smokin at the wire and win by a head, with second-choice Field Pass a neck away in third in a frantic finish. The favorite Floriform was a never-dangerous fourth; the time was 1:43 and one-half.

“To run like that off a layoff was phenomenal,” said Lynch. “He’s always had a lot of talent, and to show up and perform like that against these horses didn’t surprise me because of his previous class.”

Admission Office had certainly shown class but never got the payoffs due, with only one stakes win – the 2020 G3 Louisville here – on his resume before this success, with six place/show efforts in Graded company attesting to his nearly-horse status. Lynch may now point his prodigal horse to the G2 Wise Dan over this course and distance on July 2, a race in which he was third as the favorite in 2019.