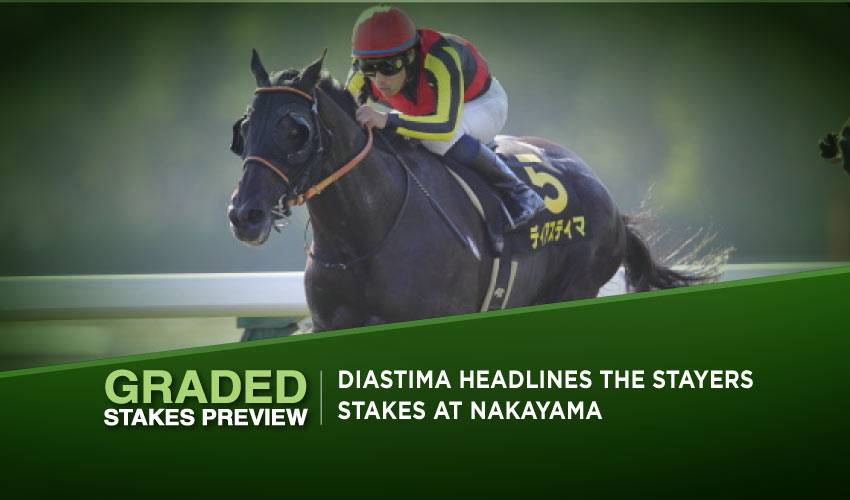 Two horses will attempt to become back-to-back winners of Graded races over Japanese tracks this weekend. On Saturday, So Valiant returns to the Hanshin Racecourse to repeat his victory in the G3 Challenge Cup. Divine Force needs to show his best to score the G2 Stayers Stakes in Nakayama again; however, the leading chance is currently Diastima.

This G3 turf race attracted a field of fourteen three-year-old and older horses who will clash over the distance of a mile and a quarter. With the purse of 82,510,000 Yen up for grabs, several exciting names are about to vie for the money, especially So Valiant.

The Masahiro Otake trained four-year-old scored the last year’s edition of the Challenge Cup, affirming the recent dominance of three-year-old participants in the event, which he’ll try to shake up this time. The son of Orfevre has ten outings under his belt, but he recorded only one in 2022.

In last season, So Valiant won two Stakes races and concluded the campaign with a bang in the Challenge Cup, but he was on hiatus since then until September when he showed up in the G2 All Comers over a mile and three furlongs.

Without a single bright moment, So Valiant trailed home in thirteenth place. Some time has passed since that lackluster performance, so he might’ve improved at home, and given his previous efforts, So Valiant simply needs to be regarded with respect.

Hindu Times is another interesting participant here as the Takashi Saito trained gelding suggested solid form in the G2 Kyoto Daishoten, where he took fourth place. At the G3 scene, he placed several times, including the Challenge Cup 2020. He finished third back then, and overall, Hindu Times looks like a smart G3 performer who should be considered one of the major players for the Saturday event.

Seven-year-old Sanrei Pocket offers a similar story as also his chances are similar, given he is a G3 winner who earned some money at the G2 level, while Echt needs to remember his great effort in the G3 Tanabata Sho that he scored easily in July. He’s not a reliable specimen, though.

The event also lured in one three-year-old colt – Be Astonished. The Yuzo Iida trained bay most notably won the G2 Fuji TV Sho Spring Stakes in March as the front-running colt tired out every single one of his rivals, upon which he tried his luck in all three Classics. He affirmed not to be classy enough to be successful among the elite as he didn’t fire on any occasion, so also, Be Astonished should appreciate the drop in the class.

So Valiant due to his last year’s performance that he ought to remember on Saturday to score again under Christophe Lemaire.

This extra-long race is held over an atypical distance of two miles and two furlongs that a field of fourteen runners will cover on the turf surface. The event is open to three-year-old and older horses, among which Silver Sonic could return with a bang.

The five-year-old trained by Yasutoshi Ikee hasn’t scored higher than at the Stakes scene as he won the June Stakes in 2021; however, he showed a great effort in the last year’s Stayers Stakes. Back then, Silver Sonic ran on in third before taking the same spot in a Stakes race and the G2 Hanshin Daishoten in March.

Subsequently, he failed to finish the G1 Tenno Sho(spring) and hasn’t hit the track since, but if he shows up in a similar form he boasted in 2021, he should be respected because he’s a solid stayer without a doubt. Moreover, Silver Sonic is capable of at least some consistency which cannot be said about some of his rivals.

We are talking about Divine Force, who won the last edition of the Stayers Stakes and achieved his premiere Graded victory. Although he shone brightly back then and defeated even a solid performer Iron Barows , he couldn’t draw on that effort later on.

All three of his attempts in the Graded competition ended up in disappointment as he earned some money only in his start in a Listed by finishing fifth. Still, he might recall he likes the Nakayama Racecourse and sport a resemblance of form on Saturday; however, the competition is tough, and he once again needs to leave also Iron Barows behind to score the Stayers Stakes for the second time.

Five-year-old Iron Barows took fifth place in the G2 Kyoto Diashoten, won by the Japan Cup scorer Vela Azul, but it could’ve been just too short for him. He is a true G2 stayer, and because the Saturday trip should suit him, he belongs among the anticipated runners.

Five-year-old Diastima was a place better in the Kyoto Daishoten, running on in fifth after bagging several Stakes races. He is consistent, relishes long trips, and looks like a Graded victor in the making. If he continues his certain progress, he could have a say here, which also applies to Plume d’Or, a Stakes winner from the end of October.

Diastima, whose profile suits this race. However, Silver Sonic and Iron Barows have strong claims, too.