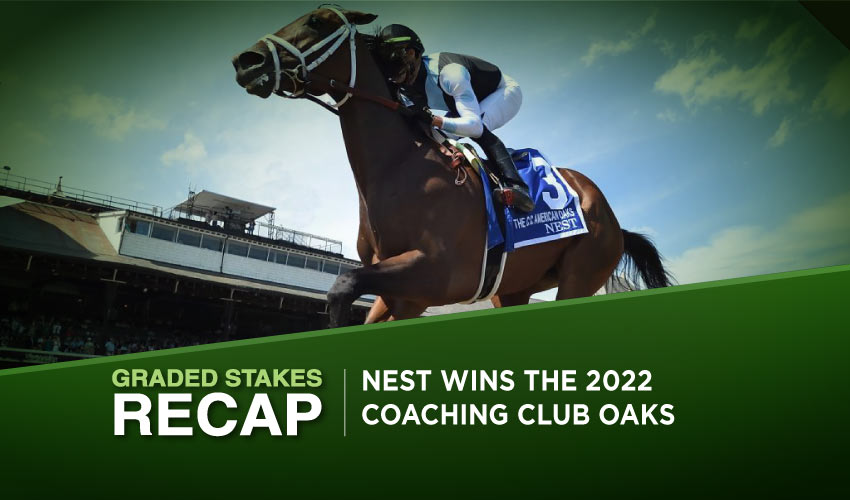 Saturday 23rd June saw a fantastic card at Saratoga with some top-quality horses and plenty of fantastic graded action. Two races that were eagerly anticipated were the Coaching Club Oaks and Caress Stakes. Here is what happened….

With just four runners in the race, this year’s Coaching Club Oaks always looked like it was always going to be a two-horse race between two superb fillies – Nest and Secret Oath.

Both have notched Grade One success earlier in the year, but it was Secret Oath who had got the better of Nest when they met in the Kentucky Oaks.

With the prospect of a classic encounter in store, many were torn as to who would come out on top on this occasion. However, what we saw, nobody would have anticipated.

With the two rivals streets ahead of the other two runners Butterbean and Nostalgic, as they approached the home turn it was Nest who looked to be gaining the upper hand.

Under a great ride from Irad Ortiz, he rode the fractions perfectly and as he made his move, he did it with plenty of horse underneath him. As they rounded the final turn it was clear there was only going to be one winner.

With Secret Oath running at one pace, the magnificent Nest bounded clear of her rival to run out a comfortable winner by ten easy lengths. With this taking success now under her belt, the future looks limitless and it will be fascinating to see where she turns up next.

For connections of Secret Oath, they will be devastated that their charge was beaten by so far and will be left contemplating whether her last start in the Preakness had taken more out of her than initially suspected.

Grade 3, five and a half furlongs, open to fillies and mares who are four or older. Total prize pool $200,000

In one of the most hotly anticipated races of the night, it was Robin Sparkles who pulled off the upset winning this year’s Caress Stakes stunningly.

The suspected pace angle of the race, this was Robin Sparkles first run on turf, following a career on the dirt which had largely flattered to deceive.

Allowed to set the fractions, jockey Javier Castellano wound Robin Sparkles up at just the right time and when the runners hit the two-furlong pole, she looked the only winner.

In our race preview, we picked Souper Sensational as our winner and she ran a big race at a big price to finish second. Forced outside, she had to take the scenic route as the runners rounded the home turn.

It was this traffic that Souper Sensational encountered that won Robin Sparkles the race. With half a furlong to run, the petrol gauge suddenly looked empty and many were looking to mount a late charge.

With the closing pack getting ever nearer, the line came at just the right time, as Robin Sparkles clung on by half a length to win the biggest race of her career.

Despite missing out on the top spot, both Souper Sensational and Lady Edith ran big races and can count themselves unlucky not to have won.

Defending champion Caravel was looking to win the race for a second year in succession but wasn’t at the races this time around finishing last of the ten runners.