Emmanuel takes the Pennine Ridge Stakes on his turf debut 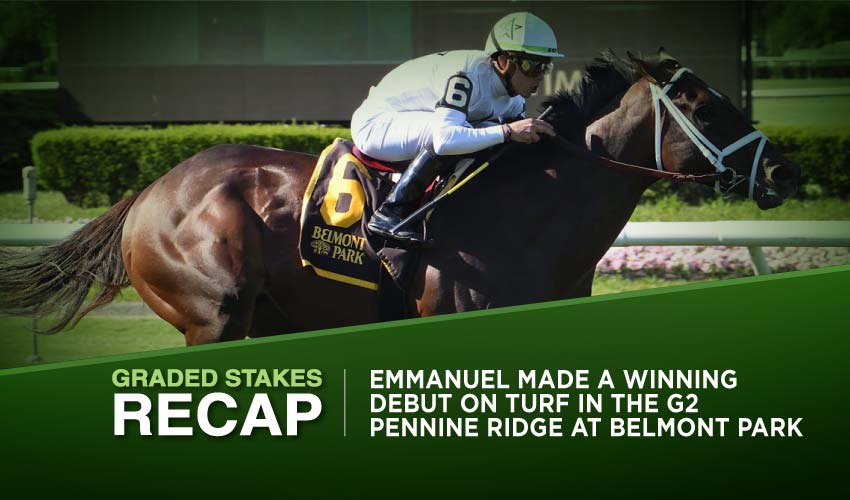 Plans can change quickly in racing and Plan B worked like a charm for Emmanuel, who made a winning debut on turf in the G2 Pennine Ridge at Belmont Park on Saturday. The colt was at one time a Kentucky Derby contender, but now has another ‘Triple Crown’ on his agenda – the Caesars Turf Triple running through the summer in New York.

Emmanuel tears up the turf

The ability has always been there, it was simply a question of how best to use it. The answer came loud and clear at Belmont Park on Saturday, when Emmanuel wired the field on his turf debut in the feature Pennine Ridge and set himself up for a high-stakes summer on the lawn.

“He’s bred for turf, but he’s always trained really well on the dirt,” said trainer Todd Pletcher. “The turf had a little give to it today, and I believe he’ll be better when he gets firmer ground.”

The More Than Ready colt was one of the many Kentucky Derby possibles in Pletcher’s barn this winter, but the trail went cold after fourth spot in the G2 Fountain of Youth and third place in the G1 Blue Grass. Now Emmanuel is back cooking with gas, the 9-5 favorite being left alone to set leisurely fractions under Irad Ortiz and saving plenty for the stretch, easily fending off the lukewarm challenge of third-choice Napoleonic War to win by a length in a time of 1:51 and change. Limited Liability came along late for third, a half-length away.

“He was the speed so I didn’t want to get in his way, the track is a little soft, the pace was okay,” said Ortiz, who signed for four wins during the afternoon. “I took a long hold, let him do his thing, at the quarter-pole I asked him and he gave me a good turn of foot.”

“We told Irad not to turn it into a sprint to the wire, because he was coming off dirt races and those turf horses can wait and then really kick,” said Elliott Walden, the CEO and president of majority owner WinStar Farm. “The idea was to go ahead and give him some momentum, which he did. Irad rode him great.”

Emmanuel, who is now three-for-five and was making his stakes breakthrough here, is out of a half-sister to dual turf G1 winner Hawkbill and is now in the right position to begin living up to his pedigree.

The plan is to send him for the Caesars Turf Triple, beginning his assault on that lucrative series in the $1m G1 Belmont Derby over a mile and a quarter on July 9. The other two legs are the $1m G1 Saratoga Derby (mile and three-sixteenths, August 6) and the $1m Jockey Club Derby back at Belmont over a mile and a half, on a date in September to be advised. Pennine Ridge winners Oscar Performance (2017) and Catholic Boy (2018) both went on to victory in the Belmont Derby.

Follow us on Social Media for Emmanuel and Pennine Ridge Stakes updates!