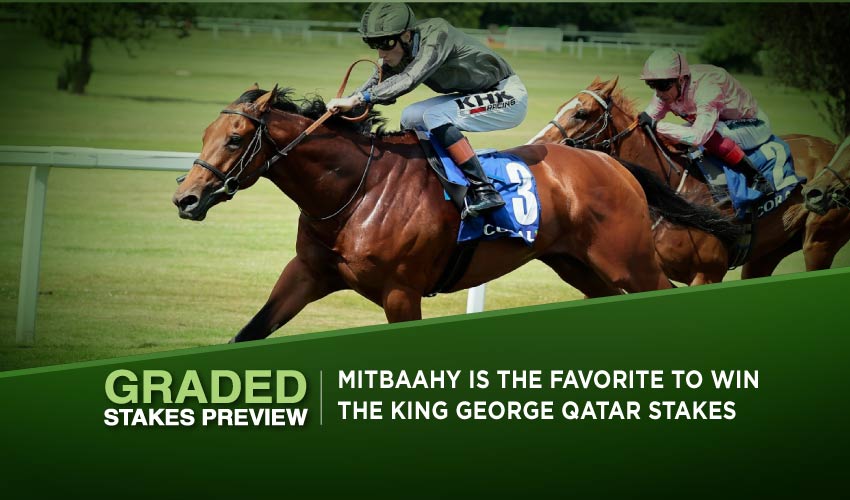 The Friday of this year’s Goodwood Festival is headlined by the Group 2 King George Qatar Stakes. As well to the Qatar Stakes, there are two Group 3 races – The Bonhams Thoroughbred Stakes and L’Ormarins Queens Plate.

Here we preview all three races and tell you everything you need to know.

Eleven will head to post for this year’s edition of the King George Qatar Stakes. A five-furlong dash for horses aged three and over, the current favorite is Mitbaahy who is trained by Roger Varian.

Mitbaahy has had a highly prolific season with two wins and two second-place finishes in his four races so far this year. Still, to win a graded contest, this will be Mitbaahy’s first race at this level.

He does head into the race with some good form following a second-place finish in the Group 3 Coral Charge. He came second that day to a horse he reopposes here, Raasel.

There is a feeling that had he not been impeded in the final furlong he would have won the race so it’s easy to see why he has been backed into favoritism here.

Raasel is looking to beat Mitbaahy for the second consecutive race following his victory in the Coral Charge. A winner of three of his five starts this year, he is a horse that has made huge strides this season.

He is a real danger to all in the field as Goodwood is a track he clearly loves. He has had two previous runs at the track and won on both occasions, there is every chance he can come out on top again and complete the hat-trick.

Charlie Hills has two live contenders for the race Equilateral and Khaadem. Khaadem heads into the race off the back of an impressive Group 3 win in the Betfair Palace House Stakes.

You can never discount a Charlie Appleby horse and here he runs the enigmatic Lazuli. The most highly tried horse in the race, Lazuli takes a big step back in class here. A cosy winner of a Grade 2 contest back in Meydan back in February, at attractive odds he has to be the value play of the race.

Khaadem is the real unknown in the field, extremely talented, he might head into this race needing the run. We will take a chance that he will be fit and ready to go and backup his Grade 2 victory from earlier this season.

Seven will compete for this year’s Thoroughbred Stakes with the betting being led by the William Knight-trained Checkandchallenge. Ridden by the excellent William Buick, Checkandchallenge has won two of his four career starts and steps back into Graded company for the first time since his last-place finish in the 2,000 Guineas.

Chasing Checkandchallenge in the betting is Bayside Boy. Trained by Roger Varian, Bayside Boy has been highly tried and is another who takes a significant drop in class following difficulties at competing at the very highest level.

A former Grade 2 winner, there is hope that a return to this level will spark some improvement and he can get himself back in the winners circle for the first time in almost a year.

Arguably the most interesting runner in the field is the Andrew Balding-trained Berkshire Shadow. Berkshire Shadow announced himself with a bang last year when he won his first two starts which included the Coventry Stakes.

Since his landmark win, he has had a tough time of things and is another who hasn’t quite been able to make the step up to Group One level.

At a bigger price, it could be worth taking a look at Sonny Liston. There could be an improvement to come from a horse that has just had four career starts.

A winner on his debut, things have been a bit tougher since, but he has a bundle of potential and could go well at a huge price.

With most of these horses out of form, it’s hard to predict where this race will land. Checkandchallenge could be the one to be on. A winner of two of his four career starts he could be the class horse of the race and he is the safest angle in what is bound to be a tightly run affair.

G3, One mile and four furlongs, open to horses aged four and over. Total prize pool £50,000

One of the longest races of the day comes in the form of the Queen’s Plate Glorious Stakes.

The current leader in the market is Rebel Romance and he is very much the horse to beat. At just four he will be one of the youngest runners in the race and will be taking on much more experienced and established horses here.

He heads into the race in great form following a very comfortable success in the Listed Fred Archer Stakes. A winner of five of his eight career starts, he has some great form and is a previous winner in Grade 2 company.

Second, in the betting is Regal Reality. Trained by Sir Michael Stoute, he has just had two runs this season and this has been his main target all season. A winner in this grade three times, he will want to build on his performance in the Davies Insurance Gala Stakes where he finished a close 2nd.

A horse that the eye is drawn to is John Leeper. A former Derby favorite, things have been tough since his no-show in the Epsom showpiece. There have been times this season where he looks to have rediscovered his form with two consecutive second-place finishes.

A horse that is a real warrior, if you back him you will be guaranteed a run for your money. Whether he has the class to win a contest like this remains to be seen.

One horse at a huge price you could look back on is Desert Encounter. Now ten, he is firmly exposed but is a consistent performer at this level. He has had four runs so far this season and has finished twice on two occasions. It would be upset if he were to win but he has a life outside chance.

In what is another tough race to call, the undoubted favorite Rebel Romance should take some stopping. He is the class and pace angle of the contest and we just think he will have too much quality for the majority of this field.