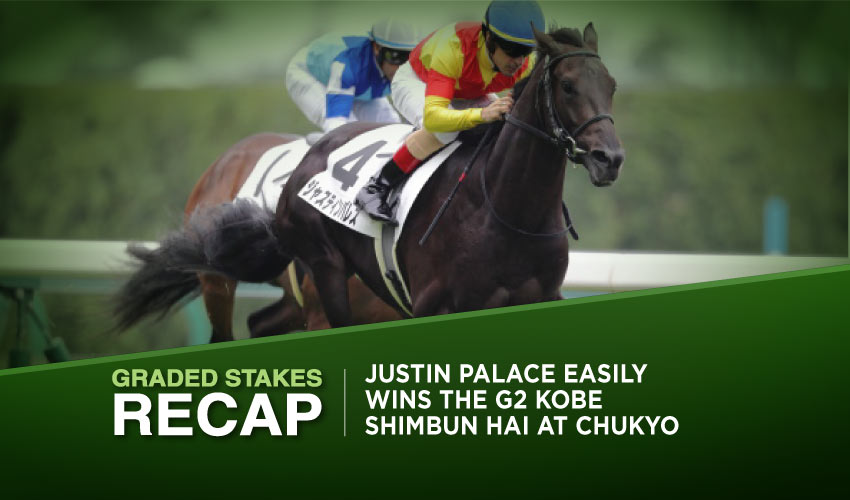 The previous weekend offered a pair of G2 races held at the Japanese tracks. Three-year-olds lined up for the Kobe Shimbun Hai at the Chukyo Racecourse, where Justin Palace caught his rivals off guard and achieved an easy victory. Among three-year-old and older horses, Geraldina caused an upset when scoring the G2 Sankei Sho All Comers. Favorites impacted neither of the events much.

Seventeen three-year-olds clashed in this G2 turf race where the favorites didn’t enjoy their day in the spotlight as Justin Palace (10-1) outshined all of them. On the distance of a mile and three furlongs, the bay colt used up his convenient starting position, settled behind the leaders at the fence, and a gap opened for him in the final stretch.

Therefore, the Haruki Sugiyama bound colt bolted forward and, under Katsuma Sameshima, cruised towards an easy victory in this 105,200,000 Yen event. His performance was nothing short of an outstanding one as Justin Palace kept drawing clear from his rivals to score by three and ½ of a length in 2m 11.10s, followed by Yamanin Zest (250-3) in second and Boldog Hos (73-10) in third.

Justin Palace finished ninth in both Classic races, but as he took second place in the last year’s G1 Hopeful Stakes behind the subsequent Japanese Derby winner, it could’ve been just a matter of time before he’d demonstrated his class again. Although he prevailed so smoothly on Sunday also thanks to a peaceful trip, he achieved his premiere Graded victory rightfully and definitely deserves some respect for it.

Yamanin Zest delivered a surprisingly great run here, finishing second in front of Boldog Hos, coming home from the rear of the field as well. Preferred Parallel Vision (19-10) didn’t get past seventh place, with Pradaria (3-1) finishing right behind him.

Another upset occurred in this G2 race over a mile and three furlongs, where three-year-old and older horses fought for the purse of 129,000,000 Yen. On the turf surface, Takeshi Yokoyama brilliantly navigated four-year-old Geraldina (185-10), galloping at the fence in fifth.

Once the field of thirteen participants turned for home, he sent Geraldina into a gap, upon which the Takashi Saito bound bay seized the front. In the closing stages, Robertson Quay (229-10) flew from the outside but was finishing from far too distant a position to actually threaten the filly who scored the race by one and ½ of a length.

Crossing the wire in 2m 12.70s, Geraldina left Robertson Quay in second, with Win Kiitos (32-1) taking third. Although Geraldina, daughter of G1 victors Maurice and Gentildonna, achieved three Stakes victories in 2021, she hasn’t been able to step up her game whenever she was pointed among the Graded competition until now.

She naturally earned some money at the G3 and even G2 scene but kept lacking something to shine properly; however, she did it this time when resisting Robertson Quay’s late finish. Behind third Win Kittos, preferred DaringTact (1-2) had to settle for sixth place.

Follow us on Social Media for more Kobe Shimbun Hai & All Comers updates!