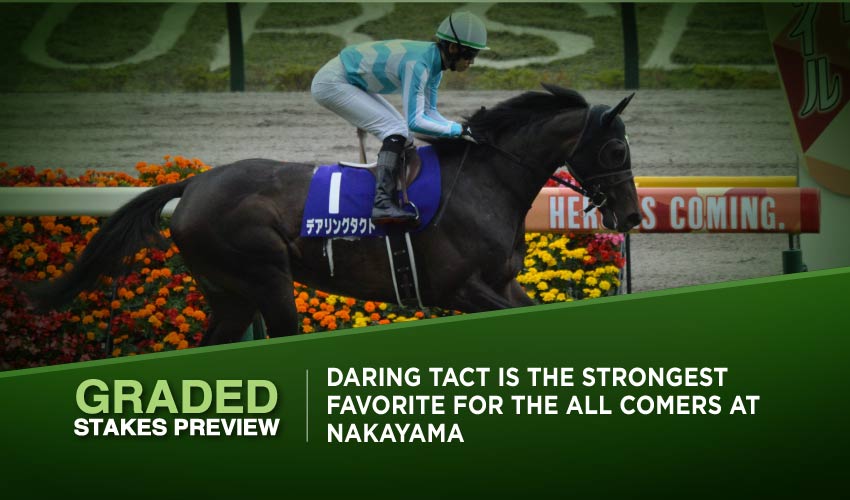 Sunday’s racing on Japanese tracks features a couple of G2 turf races. In Chukyo, three-year-olds clash in the Kobe Shimbun Stakes, won by Contrail or Saturnalia in the past, where the Japanese Derby participants face some less exposed rivals. Three-year-olds and older horses then meet in the All Comers at the Nakayama Race Course, while the purse lured in a well-known pair of runners – T O Royal and Daring Tact.

This G2 turf is open to three-year-old and older horses who will clash over the distance of a mile and three furlongs. They will compete for the purse of 129,000,000 Yen, with T O Royal ready to continue his progress. The four-year-old Inao Okada trained colt has hit the track nine times and achieved five victories ranging between narrow ones in Stakes races and an easy success at the G3 stage in February.

The son of Leontes then tried his luck among the elite in the G1 Tenno Sho (spring) in May, and even though he had no chance with impressive Titleholder, he finished a solid third place. He shouldn’t mind the drop in the distance much, and he actually should benefit from the lesser competition; however, Daring Tact won’t be that easy to better. The six-year-old mare seized the Japanese Triple Crown for fillies in 2020 and finished third in the Japan Cup back then.

A couple of outings in 2021 resulted in places at the Graded stage, but in May 2022, she didn’t hit the board for the very first time in her career as she was only sixth in the G1 Victoria Mile. There are probably some health issues Daring Tact deals with as she recorded only one other start in the ongoing season, the G1 Takarazuka Kinen in June, but this time, she performed much better and snatched up the third place behind Titleholder. She hasn’t shown up since then, but because there’s still something about her, she shouldn’t be discarded in this field.

After all, the rest of the participants haven’t scored among the elite. Five-year-old Weltreisende got closest to it in 2019 when finishing second in the Hopeful Stakes behind Contrail, while in the next season, he was third behind him in the Japanese Derby. He amassed also some places at the G2 stage and most recently, Weltreisende recorded his premiere G3 victory in the Naruo Kinen over a mile and a quarter.

He might not be the classiest horse in the field, yet he could achieve another place here even though he probably won’t be that fresh as the mentioned G3 was his only 2022 outing. So Valiant hasn’t been out in 2022 at all, yet his 2021 results were quite promising, including a G3 win and placing in a G2; therefore, he also should be considered, together with unexposed Crystal Black. He has only three starts under his belt but scored at the G3 scene in January. His start in the Japanese Derby simply might’ve occurred too soon for him, and on Sunday, and might suggest what he is capable of in this company.

Daring Tact. She doesn’t appear to be the same filly that bagged the Japanese Triple Crown for Fillies, but there still should be something left in her to score, at least at the G2 scene.

Seventeen three-year-olds will line up in this G2 race over a mile and three furlongs on the turf surface. The purse of 105,200,000 Yen attracted a few colts who showed in the Japanese Derby, with Pradaria being the only one who hit the board. The Manabu Ikezoe bound bay has five outings under his belt as he broke his maiden at the third attempt in March, upon which he successfully stepped up his game in the G2 TV Tokyo Hai Aoba Sho, a Classic trial over a mile and a half.

Back then, Pradaria triumphed smoothly and was expected to give a solid effort in the Japanese Derby, which he did and finished fifth. The son of Deep Impact subsequently received some rest; since May, he hasn’t hit the track, which might be a problem on Sunday; however, his most serious rivals face the same issue here. Pradaria is still at the beginning of his career, and there could be something more lurking in him; therefore, he should be considered for the Kobe Shimbun Hai.

Although he finished only 12th in the Japanese Derby, Ask Wild More is another interesting colt in the field as he’s also a G2 winner. In 2021, the Hideaki Fujiwara trained bay most notably secured second place at the G3 scene, while in the ongoing season, he started off with fourth place at the same level and then handled victoriously the tilt at the G2 Kyoto Shimbun Hai, a Classic trial over a mile and three furlongs.

The son of Kizuna prevailed in a course record back then, and even though he remained an outsider for the Japanese Derby, his performance among the G2 company was solid, and he could run another great race on Saturday. Be Astonished became a winner of yet another G2 Classic trial in spring, the Fuji TV Sho Spring Stakes over a mile and a furlong.

However, he was sort of expected not to be that classy to play an impactful role both in the Japanese 2000 Guineas and the Japanese Derby. In both cases, these stipulations proved true, and the Yuzo Iida should appreciate lesser competition in Saturday’s race. Still, he looks like he could be a decent Graded horse, which applies to Justin Palace as well. He failed to impress in both mentioned Classic races, too, but in 2021, he finished second in the G1 Hopeful Stakes; therefore, he shouldn’t be entirely discarded in this race.

The last to mention is Parallel Vision, who has only two starts as he scored his debut and his second outing in a Class 1 race, and very easily so. Under Christophe Soumillon, this unexposed son of Kizuna may catch the more experienced rivals off guard here.

Pradaria, whose fifth place in the Japanese Derby only confirmed his suggested class, which he should display once again. Parallel Vision looks dangerous, though.

Follow us on Social Media for more All Comers & Kobe Shimbun Hai updates!