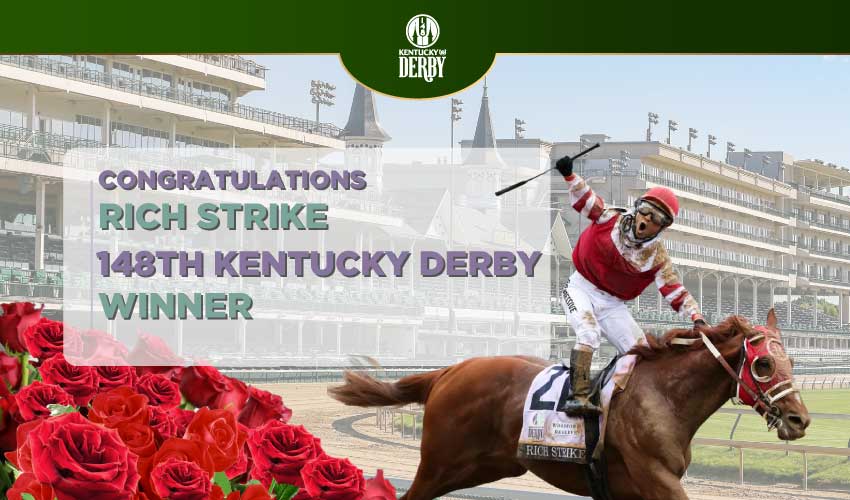 There was a stunning upset in the Kentucky Derby at Churchill Downs on Saturday, when unconsidered 80-1 chance Rich Strike – who only drew in from the also-eligible list on the day before the big race – became the second longest-priced winner in Derby history after hunting down the favourite Epicenter in the closing stages.

After months of preparation and anticipation, after 37 prep races, after countless hours of punditry, barrels of ink spilt across the press and the internet, all the forensic assessments available in the modern era, the Kentucky Derby, America’s greatest race, was won by an 80-1 shot called Rich Strike who wasn’t even in the field until 24 hours before post-time.

Rich Strike won the Derby at Churchill Downs on Saturday, breaking every rule apart from the too-often forgotten one that insists no horse has no chance. He came with an irresistible rail rally under Venezuelan jockey Sonny Leon to run down the 4-1 favourite Epicenter and win by three-quarters of a length, springing the second-largest upset in the Derby’s long history behind only 1913 winner Donerail.

The third-choice Zandon was third, another three-quarters of a length back but two lengths ahead of Simplification in fourth. The clock showed 2:02 and three-fifths. Details, details. The word on everyone’s lips was ‘who?’. Trainer Eric Reed knew.

“I fell down when they hit the wire,” he said. “This is why everybody does this. It’s a horse race, and anybody can win. And the tote board doesn’t mean a thing.”

Rich Strike – a son of Keen Ice, owned by Rick Dawson, bred by the storied Calumet Farm – only got his chance at glory when Ethereal Road was scratched on Friday morning, moving him off the also-eligible list into the body of the race, into position to make history. His only previous run at Graded level brought him third place in the G3 Jeff Ruby Steaks on the synthetic at Turfway Park; Reed had only won one Graded stakes in his career, Leon hadn’t won any.

They were assisted on their journey into fame everlasting by a headlong early gallop, the fastest first quarter in Derby history set by Summer Is Tomorrow, 21.78s, which ensured that the winner would eventually come from off the pace. The first seven horses after half a mile, including the fancied Messier, Taiba, Cyberknife and Charge It, all finished tenth or worse.

Epicenter had the perfect route, and came to win his race at the top of the stretch. Zandon had a great run through and was quickly at his side. They slugged it out down the stretch, and then a challenger appeared on the rail, as if from nowhere, which is exactly where Rich Strike had come from.

“I didn’t know if he could win, but I had a good feeling with him,” said Leon. “I had to wait until the stretch, I waited, and then the rail opened up. I wasn’t nervous. I was excited. In the last 70 yards, I thought ‘I got it’.”

He got it, Rich Strike got it, the Kentucky Derby. The vast crowd fell silent, trying to work out what had just happened, who had just happened. They would go home with Reed’s words on their minds, in their hearts.

It’s a horse race, and anybody can win. Even in the Derby. That, my friends, is racing.

Follow us on Social Media for instant Rich Strike updates!