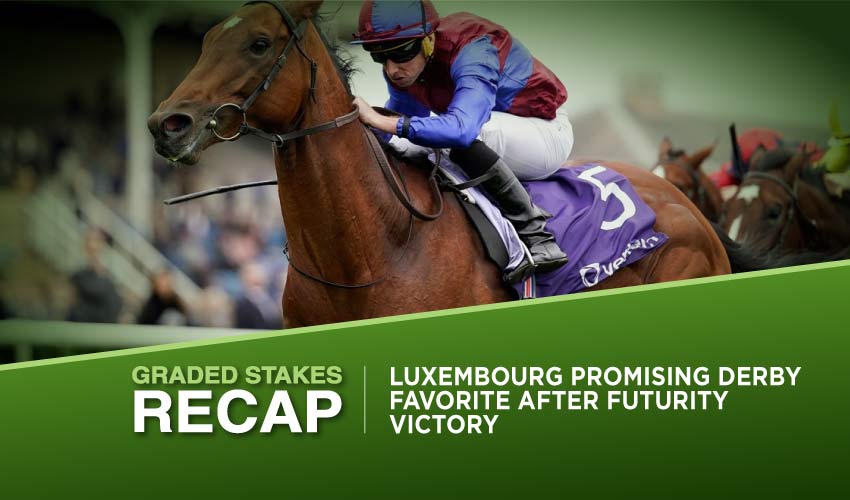 The Vertem Futurity Trophy, the final Group 1 race of the British campaign, often produces a star of the future, and we may have seen another at Doncaster on Saturday in the unbeaten and enormously exciting Luxembourg, whose dominant display ensured that he would remain as the clear ante-post favorite for next year’s Derby.

Luxembourg is a very small country but it is also a horse with a very big future after the colt of that name cemented his Classic credentials with victory in the Vertem Futurity Trophy at Doncaster on Saturday, the final Group 1 of the British season.

The authoritative, straightforward success of the Irish colt, now unbeaten in three races, was also the tenth in the race for trainer Aidan O’Brien, who thus equaled the record set by the late, great Sir Henry Cecil. O’Brien’s previous winners of the Futurity include Luxembourg’s sire Camelot, High Chaparral, Saxon Warrior, and Magna Grecia, Classic heroes all, and that looks the future for Luxembourg too.

“He’s always been very exciting,” said the master trainer. “He’s a big horse, he travels very well. Today he had to get down and stretch in the last furlong, which was good for him really. We’re delighted with him.

“He has a lot of class and a lot of pace. When he won the Beresford last time [over a mile] they said his last three furlongs were faster than all the sprints that day.”

It was an education as well as an exhibition for Luxembourg, who was given a percentage ride by Ryan Moore on the flank of the group. The well-backed 4-6 favorite, encountering soft ground for the first time, moved through from midfield to take charge inside the final quarter-mile and kept on strongly when pressed, always doing more than enough to fend off his challengers. At the line he was a length and three-quarters ahead of Sissoko, trained by O’Brien’s son Joseph, with Bayside Boy a short head away third after meeting trouble in running.

The last four winners of the Futurity all went on to win either the 2,000 Guineas or the Irish 2,000 Guineas and although Luxembourg, who fetched a near-bargain 150,000 guineas as a yearling, will no doubt stay further than a mile, the Guineas at Newmarket is expected to be his first target of 2022 before attention is turned to the Derby.

“He’s a Guineas horse,” said Moore, in his laconic fashion. “He’s a real smart horse, very scopey, an exciting horse to look forward to. It couldn’t have gone more smoothly and there’s more improvement to come.”

This was the 18th Group/Grade 1 success of a brilliant season for O’Brien, who won seven European Classics in 2021 and now heads into the winter with the Derby favorite yet again. Luxembourg, who has done all his racing at a mile, with victories in a Killarney maiden and the Group 2 Beresford Stakes at the Curragh preceding this Doncaster triumph, is second-favorite for the 2,000 Guineas behind Group 1 Dewhurst Stakes winner Native Trail.

Get a Daily Rebate and make sure to stay tuned for the latest Racing odds, Races results and Horse racing entries.

Follow us on Social Media for instant Doncaster updates!