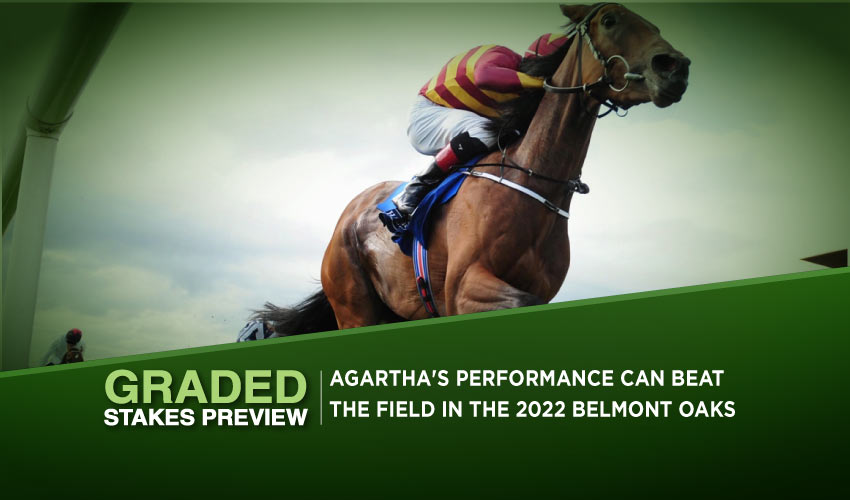 A huge weekend awaits this weekend as all attentions turn towards Belmont Park for the 2022 Belmont Oaks and Belmont Derby. We preview everything you need to know.

At the time of writing 10 horses head to Belmont Park for 2022 Belmont Oaks. The field has an international flavor with horses from Ireland, the UK, and France all making the trip across the Atlantic in the hope to land one of racing’s most prestigious prizes.

In a wide-open contest, leading the betting is Haughty. Haughty is one of three horses in the race for renowned US trainer Chad Brown. Haughty ran third in last year’s Breeders’ Cup Fillies Juvenile turf and returned to action with a comfortable win in the Listed Penn Oaks. Stable jockey Flavian Prat has chosen to ride Haughty and she has every chance of winning her first Grade 1.

Brown will also saddle McCulick. A filly out of Frankel, McCulick has three stakes places to her name and certainly won’t be out of place in this field.

The last horse from Brown’s yard is Consumer Spending. Ridden by Manny Franco, Consumer Spending finished three places behind Haughty in the Fillies Juvenile Turf but has subsequently gone on to beat the winner of that race and notch a Grade 2 success. She heads into this race flying under the radar and could be a real threat to all.

Leading the European charge is the Joseph O’Brien-trained Agartha. A winner in both Group 3 and Group 2 company, Agartha has been highly tried since and managed to finish fifth in the Irish 1,000 Guineas. O’Brien knows how to ready a horse for a big race and there is a general feeling that there is more to come from this talented filly.

Aiden O’Brien is after even more US success and heads stateside with Concert Hall. A winner of this race last season with Santa Barbara, an O’Brien horse always has to be respected. Jockey Ryan Moore is having a great season but Concert Hall has a bit to find in comparison to some of her rivals. A 4th place finish in the Oaks is a decent bit of form but she was well beaten that day. She also finished 4th in the Pretty Polly Stakes and has a lot to prove in what will be her first run in the US.

Charlie Appleby has enjoyed some fantastic success in America and will be hoping to add to his ever-growing resume with a first win in the 2022 Belmont Oaks. His charge, Win the Moonlight will be ridden by Frankie Dettori and she will be wanting to build on her Listed success in the Pretty Polly Stakes. She finished last in the Oaks but didn’t seem to handle the Epsom track. She could be the value play of the race.

Joseph O’Brien is having yet another great season and Agartha has a horse that could be special. Her performances even in defeat have been promising and she could be a threat to the entire field.

Thirteen horses head to post for one of America’s biggest races and just like the Belmont Oaks, there are a host of international horses looking to take this prestigious home with them.

Currently leading the betting is the Aiden O’Brien-trained Stone Age. Stone Age has won two of his three starts this season but could only manage a 6th place finish in this year’s Derby. There was a feeling that a mile and four furlongs stretched the horse too far and a return to ten furlongs should be right up his street. O’Brien has won this race twice, including last year. Stone Age has to be treated seriously.

Rounding out the top two in the betting is another European horse in the form of Nations Pride. Frankie Dettori will take the ride on a horse that has won four of his last five starts. His defeat came in the Derby where he could only finish 8th. Like Stone Age, a drop-back in trip is expected to be a good move and he could be a real threat to the favorite.

The highest US-trained horse in accordance to the betting is the wonderfully named Tiz the Bomb. Multiple Graded winners, Tiz the Bomb has some great form in the book but might find this step up in trip going against him. A shrewd operator at one mile, this step up to one mile two furlongs could see him at a disadvantage and any bets placed on the Kenny McPeak-trained horse have to be placed with a slight degree of risk.

Top US jockey Irad Ortiz will be bidding for success on the Todd Pletcher-trained Emmanuel. Neither Pletcher nor Ortiz has won this race since it became known as the Belmont Derby and this Hall of Fame duo will be hoping that changes this weekend. On paper, Emmanuel has a bit to find, but he does head into the race fresh off the back of a win in the Grade 2 Pennine Ridge Stakes. This is another step up in the trip but he could be the value option of the race.

Finishing behind Emmanuel in the Pennine Ridge was the Chad Brown-trained Napoleonic War. Napoleonic War is a big price and has a great deal to do if he is to shock the racing world, but under the excellent Flavian Prat does have a chance to run a big race. The least exposed horse in the race, Napoleonic War could still be anything and for those looking for a big-priced winner, he could be the sensible play.

In any big race, you always need to treat Aiden O’Brien-trained horses with the utmost respect. Stone Age ran a poor race in the Derby but will be looking to return to form here. His previous runs at ten furlongs have been highly promising and he could be the horse to beat here.