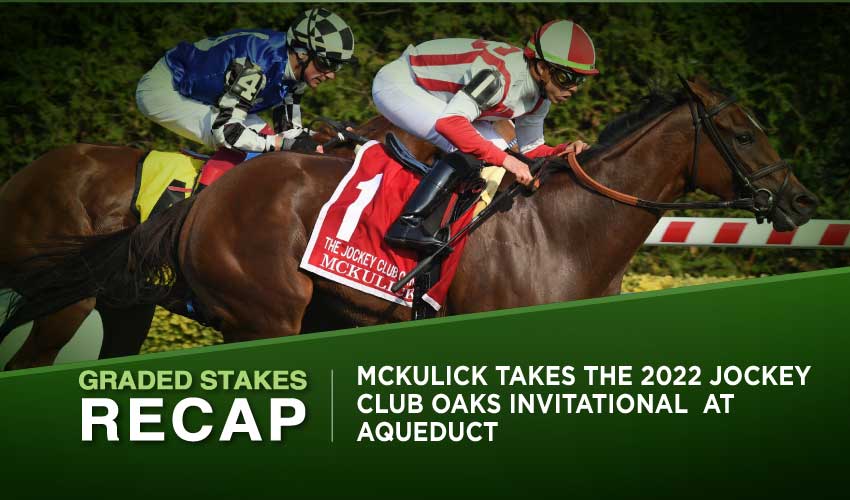 Cream rose to the top at Aqueduct on Saturday, with the final legs of the Turf Triple going to horses who had already won a race in the series. Nations Pride ran out a very impressive winner of the G3 Jockey Club Derby, while McKulick showed plenty of determination to land the 2022 Jockey Club Oaks.

On a bonanza Saturday afternoon in North America for Godolphin and trainer Charlie Appleby, their Nations Pride hit the jackpot in the third leg of the Turf Triple when romping in the Jockey Club Derby at Aqueduct.

The race was billed as the rubber match between the 1-2 favorite and Classic Causeway, winners of the first two legs of the Triple, but it was less of a contest and more of a coronation for Nations Pride, who sat in third while Classic Causeway rolled out boilerplate fractions to the top of the stretch.

Nations Pride moved smoothly through to challenge and then quickened impressively, clearing right away to win by six and a quarter lengths from the late-closing The Grey Wizard, with the weary Classic Causeway a half-length back in the show spot. The clock showed a new track record of 2:24.14, almost three seconds faster than the previous best.

“Heading into the straight it was never in doubt,” said jockey Frankie Dettori. “I hadn’t gone for the gears and everyone else was cooked.”

His share of the purse made Nations Pride a millionaire, and he is now six-for-nine lifetime with a G1 – the Saratoga Derby – in his locker. He’ll head back to Britain now but may return for the Breeders’ Cup Turf, although Appleby has several options for that race.

McKulick so special for Brown

Nations Pride dominated the colts’ version of the Turf Triple and McKulick did the same in the distaff Turf Triple, going two-for-three in the series when adding the Jockey Club Oaks to her earlier victory in the G1 Belmont Oaks.

Beside Herself towed the field along with steady fractions as Irad Ortiz played patience aboard McKulick, only letting the 4-5 favorite move forward around the turn. There were three in line at the top of the lane but McKulick was soon in front, and she showed plenty of resolve to turn back the challenge of the tenacious German raider Toskana Belle and win by a half-length, stopping the clock in a new track record of 2:12.38. The longshot Miss Yearwood came through for third, three-quarters of a length adrift.

“I’m so proud of this filly,” said trainer Chad Brown. “She’s named after my late friend Mary McKulick, my first employee, so it’s special that she’s having a great year.”

The equine McKulick is now three-for-seven, never off the board, and a millionaire with her share of the purse. She may be a contender for the Breeders’ Cup Filly & Mare Turf, but Brown has a very deep group of distaffers and she could well be found another target.