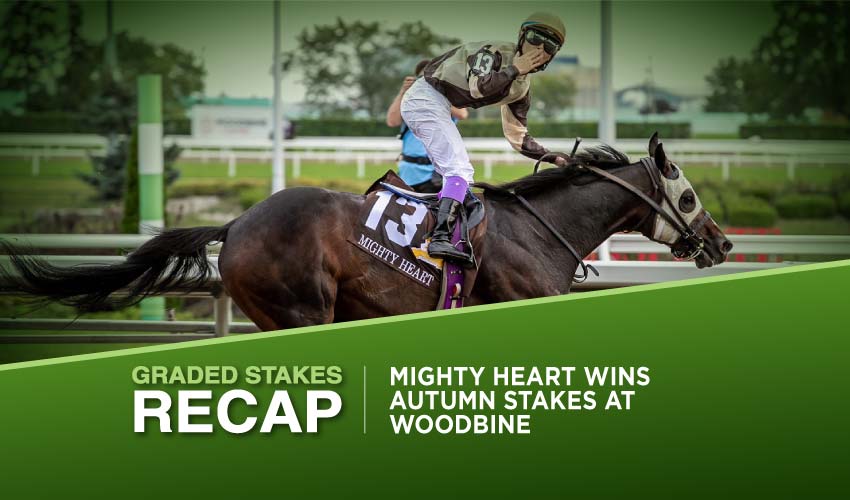 The trio of Grade races in Woodbine, Canada went by without any huge upsets this weekend. On Saturday, Skygaze fulfilled the role of a favourite in the G3 Maple Leaf Stakes, upon which Lady Speightspeare maintained her unbeaten record in the Bessarabian Stakes. Mighty Heart then slightly surprised his rivals when bagging the Autumn Stakes gate-to-wire.

The G3 race held at the distance of a mile and a quarter welcomed a field of 10 three-year-old and older fillies and mares, and on the all-weather surface, Skygaze (63-20) dominated the event easily. Although she had nothing left in the tank last time out and stayed on to grab second, in this $150,000 race, she delivered an absolutely stunning performance under Patrick Husbands. The Mark Casse four-year-old filly broke well, settled in third at the fence, and as the field was going for the final turn, Skygaze suddenly switched gears and swung for the first place. The winner was clear from that point on as Skygaze scooted away from all of her rivals to score her first Grade victory in an impressive style. She crossed the wire in 2m 3.65s with the advantage of 4 and ½ of a length over Sister Ootole (43-5), flying from the outside to get second place ahead of consistent Merveilleux (5-1).

The trio of other contestants trained by Mark Casse included a G3 winner Art of Almost (5-1), and promising but inexperienced Broadway Lady (118-10), yet none of them played an impactful role in the end despite the fact the latter was showing the way. Once the pace increased, she had nothing to offer, though, and finished one but last.

The G2 race over 7 furlongs meant a premiere for Lady Speightspeare (109-20) on the all-weather track; however, the three-year-old chestnut handled it just fine. Among three-year-old and older fillies and mares, Our Secret Agent (31-20) was the favourite who took the lead initially, but unbeaten Lady Speightspeare trained by Roger L Attfield was stalking her throughout the $175,000 race until she commenced her finish in the final stretch. Our Secret Agent simply had no chance with her as Lady Speightspeare charged for the lead, and aboard with Emma-Jayne Wilson, she aimed for her fourth victory out of four starts, including her last year’s win in the G1 Natalma Stakes. By her Saturday’s success, she mostly confirmed she’s maintained her ability even in the lengthy absence and crossed the wire in 1m 21.03s. Our Secret Agent finished second by 4 lengths, with La Libertee (188-10) taking third.

7 three-year-old and older horses clashed in this $175,000 G2 race held at the distance of a mile and a half of a furlong, with the duo of preferred horses having to settle for places when Mighty Heart (18-5) scored a mighty victory. Although beaten last time out when he met some of his Sunday’s rivals, he just held them off this time on the all-weather track and scored his second G3 win. Leading the pack from the beginning, he had a perfect trip from the front, and supported by Patrick Husbands, the Josie Carroll’s four-year-old charge was all heart in the final stretch, taking the race in 1m 42.51s. As Patrick Husbands crossed the wire aboard his mount with the advantage of ¾ of a length, he won the Autumn Stakes for the fifth time, setting a new record. Preferred Sir Winston (6-4), trained by Mark Casse, delivered an eye-catching finish from the rear of the field, yet had to settle for second place once again; still, he left Special Forces (11-5) behind in third this time.