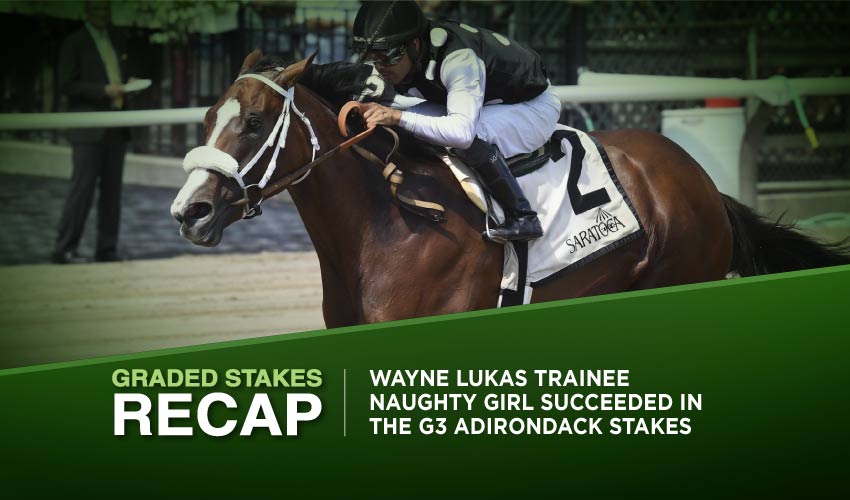 On Sunday, a couple of G3 races for fillies headlined the card at the Saratoga Race Course. Two-year-old fillies lined up for the G3 Adirondack Stakes, where Naughty Girl succeeded over her rivals despite giving his jockey an attitude in the final turn. Later on, With The Moonlight delivered a triumph for Europe in the G3 Saratoga Oaks Invitational Stakes as McKulick came home in second.

Six two-year-old fillies clashed in this G3 dirt race held over the distance of six and a half furlongs. Vying for the purse of $200,000, Naughty Girl (29-20) had a fine start and settled at the front. Under Luis Saez, she set the pace; however, she didn’t fulfil the role of a favorite so effortlessly as it could’ve been, hadn’t she turned wide for home.

She hanged to the right so much she got to the middle of the track, and it even seemed she was about to lost the race entirely, but in the end, the jockey only had to keep her pointed in the right direction. Naughty Girl crossed the wire in 1m 18.97s with the advantage of two and ½ of a length over second Janis Joplin (73-10). Sabra Tuff (23-5) was third.

Naughty Girl, trained by Wayne Lukas, recorded her third start on Sunday as prior to her premiere G3 triumph, the daughter of Into Mischief achieved fourth and first places in maiden races. Last time out, she was so impressive that she was a clear first chance of the Adirondack Stakes, which she proved to be quite accurate as she defeated the quite talented field despite hanging in the final stretch.

The other G3 race of the card was open to three-year-old fillies who competed for the purse of $700,000. The turf race held over the distance of a mile and one and a half furlongs resulted in revenge for the Belmont Oaks Invitational Stakes, where McKulick (7-5) scored before With The Moonlight (23-20), who prevailed this time.

Under William Buick, the bay daughter of Frankel galloped close to the lead, took command in the final stretch, and subsequently cruised towards her first Graded success. The Charlie Appleby bound bay triumphed in 1m 54.60s, leaving the second McKulick behind by one and ¾ of a length, with New Year’s Eve (108-10) running in third.

After Charlie Appleby bagged the Saratoga Derby with Nations Pride, his trainee With The Moonlight became the favorite of the Saratoga Oaks, even though she was defeated by McKulick last time out. Both daughters of Frankel gave great efforts on Sunday, yet With The Moonlight was simply better as she gained enough lead in time so that McKulick couldn’t really catch her.

In the end, she barely grabbed second place in front of New Year’s Eve. Fourth Contemporary Art (63-10) was close, too, while Oakhurst (63-10) was the last to cross the wire.

Follow us on Social Media for more Saratoga updates!